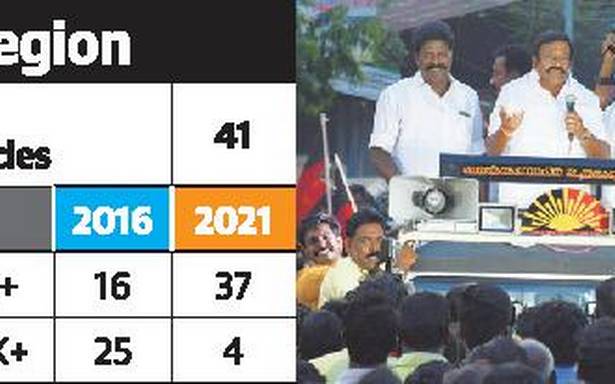 The DMK regained its supremacy in the central region. Of the 41 seats in eight districts, the party and its allies were set for victory in 37, at the time of going to print.

The DMK-led front that had lost its hold in some segments in 2016 tasted a stupendous success this time. A clear anti-incumbency sentiment, the discontent over the farm laws enacted by the BJP government at the Centre and poor rehabilitation measures after Cyclones Gaja and Nivar seem to be behind the defeat of the AIADMK, as the DMK-led alliance posted big wins in Tiruchi, Perambalur, Ariyalur and Karur districts. The delta districts of Thanjavur, Thiruvarur and Nagapattinam, the DMK citadel once, returned to the party with the majority of its candidates romping home.

The DMK made a clean sweep in Tiruchi, Karur, Ariyalur and Perambalur districts. The candidates of the DMK and its allies headed for victories in almost all 17 constituencies, including those touted as the AIADMK’s strongholds. The DMK headed for victory in all nine constituencies in Tiruchi district. Tourism Minister Vellamandi N. Natarajan was dealt a crushing defeat in Tiruchi (East) by Inigo Irudhayaraj of the Christhuva Nallenna Iyakkam, who contested the election on the DMK symbol. The DMK candidate won in Srirangam that had sent Jayalalithaa to the Assembly in 2011. DMK principal secretary K.N. Nehru defeated V. Padmanathan of the AIADMK by more than 80,000 votes in Tiruchi (West). Anbil Mahesh Poyyamozhi, a confidant of DMK youth wing leader Udhayanidhi Stalin, won for the second consecutive term in Thiruverumbur, by about 50,000 votes.

The DMK-led alliance won in 10 of the 12 constituencies in Thanjavur and Tiruvarur. While AIADMK deputy coordinator K. Vaithilingam won by a comfortable margin in Orathanadu in Thanjavur district, Food Minister S. Kamaraj and Textiles Minister O.S. Manian were set to retain Nannilam and Vedaranyam respectively, though with a slender margin.

In Pudukottai, Health Minister C. Vijayabaskar was leading by 7,242 votes in Viralimalai at the end of the sixth round. However, the counting was stopped for more than three hours as DMK agents raised suspicion over the EVMs that were tied up with coir. The agents of the AIADMK and the DMK were engaged in heated exchanges on several occasions. Manithaneya Makkal Katchi leader M.H. Jawahirullah won in Papanasam, having contested in the election on the DMK’s symbol.

In Karur, DMK heavyweight V. Senthil Balaji and Transport Minister M.R. Vijayabaskar were locked in a see-saw battle. K. Annamalai, State vice-president of the BJP and the former IPS officer, trailed DMK nominee R. Elango by 4,544 votes in Aravakurichi at the end of the 19th round.