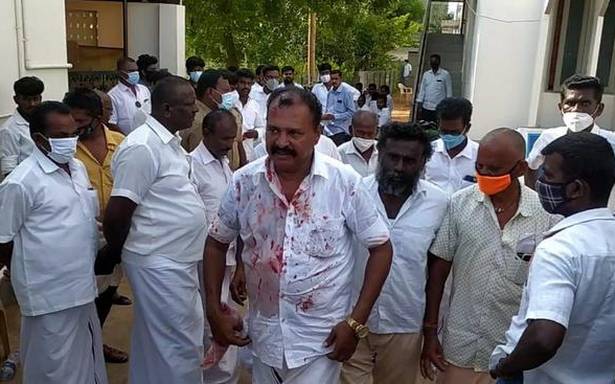 Tense moments prevailed when two groups of the ruling party (DMK) men allegedly exchanged blows even as the auction for more than 30 works worth over ₹ 3.5 crore was under way at the office of the TWAD Board situated on the Sivaganga-Thondi Road here on Monday.

A large posse of police personnel deployed near the office saved the situation, which looked like a free-for-all since forenoon.

According to reliable sources in the TWAD Board, the DMK Sivaganga deputy secretary Sengai Maran and his men were present at the TWAD office, where the tenders for various works were being taken up for auction. Even as the process was on, another set of DMK men led by Soman, farmers’ wing coordinator of the district, picked up a wordy altercation.

When some of the officials present attempted to calm down the situation, the DMK men flexed their muscles. Raising their voices, they came closer and lifted the chairs and attacked each other. For about 20 minutes, there was noise and physical blows. Even before the police could step in, Mr Soman suffered head injuries and was rushed to his vehicle.

Some of the supporters of Mr. Sengai Maran chased their rivals and pelted stones, a police officer said.

As the news spread, some shops downed shutters and people in the vicinity moved to safer places.

According to the supporters of Mr Soman, he was admitted in the Government Hospital for bleeding injuries. The police are investigating and the case is yet to be registered.