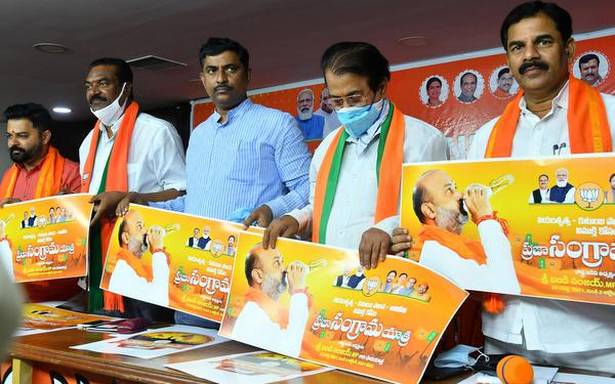 “In the last seven years, democratic values deteriorated in Telangana going by the manner in which the Assembly proceedings are conducted, and dissent is sought to be crushed with the first family of TRS having a stranglehold in power,” said senior BJP leader P. Muralidhar Rao on Friday.

“We expected democracy to deepen and strengthen with the formation of TS but it has gone the other way due to the ‘machinations’ of Chief Minister K. Chandrasekhar Rao. There is lot of discontent among the youth and the unemployed due to lack of education and employment opportunities,” he said.

Addressing a press conference at the party office, he said that the government has neither been able to generate fresh employment nor has filled the existing vacancies much to the frustration of the youth.

“There is a lot of hollow propaganda about the welfare schemes for SCs and weaker sections as these sections have been affected the most in these years,” he said.

Mr. Rao accused the TRS government of pushing the State into a debt trap with nothing much to show for development. “This is not a government that will change with criticism or questioning. So, it needs to be thrown off power. Other Opposition parties are also feudal and family-ruled ones. BJP alone can take on TRS,” he claimed.

“The proposed ‘Mahasangram Yatra’ of party president Bandi Sanjay Kumar next week is going to be ‘Jana Chaitanya Yatra’ to convince people about the need for a political change just like Prime Minister Narendra Modi brought about changes in the country,” he said, and released the logo and publicity material for the tour programme.