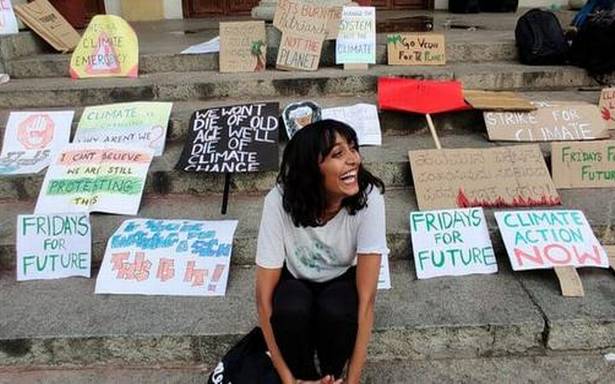 “Arrest of 21 yr old Disha Ravi is an unprecedented attack on Democracy. Supporting our farmers is not a crime,” said Delhi Chief Minister Arvind Kejriwal in a tweet on February 15.

Congress leader Rahul Gandhi posted news articles on Ms. Ravi’s arrest, on a YouTuber who threatened journalists in a video about the toolkit that Ms. Ravi is accused of editing and on the Centre’s threats to Twitter employees over unblocking critical accounts.

Along with the articles, Mr. Gandhi tweeted a couplet in Hindi. “Your lips are free to speak/Say that the truth is still alive!” it said. “They are scared, not the country! India won’t be silenced.”

Priyanka Gandhi Vadra also tweeted a Hindi couplet. “Those with arms are scared of an unarmed girl/The light of courage has been spread by this unarmed girl,” she said, adding several hashtags, including #ReleaseDishaRavi and #IndiaBeingSilenced.

Rajya Sabha MP and former Environment Minister Jairam Ramesh said, “The arrest and the manner of arrest of green activist Disha Ravi shows clearly the intensifying Murder Of Democracy in India. But the young in India cannot be silenced. More power to them!” he tweeted.

Later, he tweeted a news report on the non-bailable warrant issued against another activist as well. “Delhi Police on the rampage. After Disha Ravi, it is now the turn of another young woman, Nikita Jacob. More will no doubt follow…This is Tanashaahi [dictatorship] in New India called Amit Shahi!” he said.

Late on February 14, Congress MP Shashi Tharoor, a former Minister of State for External Affairs, tweeted a British newspaper’s article on Ms. Ravi’s arrest and warned of the international fallout. “DishaRavi’s arrest is the latest escalation in India’s crackdown on free expression & political dissent as it seeks [to] stifle the farmers’ mass protests, says the @dailytelegraph UK. Doesn’t GoI care about the damage it’s doing to its own global image?” he tweeted.

Communist Party of India (Marxist) leader Sitaram Yechury tweeted an article about Ms. Ravi’s farmer grandparents being the motivation for her to become a climate activist. “Modi regime thinks by arresting a grand daughter of farmers, under Sedition, it can weaken the farmers’ struggles. In fact, it will awaken the youth of the country and strengthen the struggles for democracy,” he tweeted.