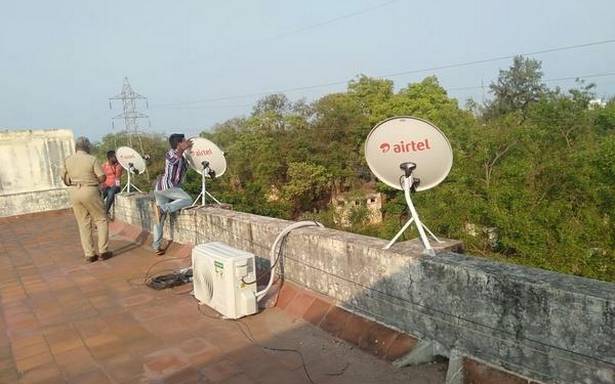 Five dish antennas fitted on buildings at the Kunthavai Naacchiyar Government Arts College for Women in Thanjavur, one among the three counting centres in Thanjavur district were removed on Monday after the Dravida Munnetra Kazhagam candidates objected to their presence.

While the Electronic Voting Machines used for polling in Thanjavur, Thiruvaiyaru and Orathanadu Assembly constituencies have been kept in three separate strong rooms at the Thanjavur college premises, the EVMs of Kumbakonam, Thiruvidaimaruthur and Papanasam Assembly Segments were stored at the Government Arts College, Kumbakonam and of the Pattukottai and Peravurani Segments at the Government Boys Model Higher Secondary School premises at Pattukottai.

Paramilitary and police personnel have been posted round-the-clock in a three-tire security to prevent access to the strongrooms where the control units have been kept and sealed in the presence of the agents of the contesting candidates after the conclusion of the poll on April 6, official sources said.

Closed-circuit cameras have also been installed at these premises and the agents of contesting candidates were also permitted to monitor the CCTV recordings at the control rooms set up at the centres.

Meanwhile, the nominees of the Dravida Munnetra Kazhagam for Thanjavur, Thiruvaiyaru and Orathanadu segments, T. K. G. Neelamegam, Durai Chandrasekaran and Ramchandran visited the Kunthavai Naacchiyar Government Arts College for Women on Monday and interacted with their agents posted at the counting centre.

After the interaction, the DMK contestants told the officials that the CCTV cameras installed at the entrance of the institution were not functioning properly and asked them to replace the cameras with rotating CCTV camera at the entrance. Objecting to the entry and exit of the college principal, professors and other college staff when the entire premises remains under the control of the Election Commission of India, they insisted that the five dish antennas installed at the college be removed immediately. The antennas were later removed by the officials, according to official sources.