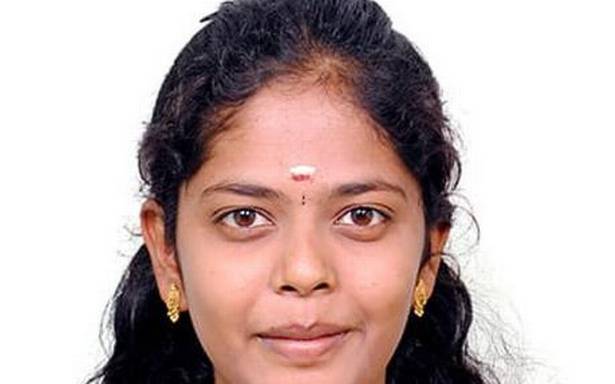 A. Oviya, daughter of S. Ariyanayagam of Dindigul district, has secured the first rank in Tamil Nadu and the second rank at the national level in the Indian Council of Agricultural Research examination.

The exam was conducted on September 17, and the results were announced on Wednesday.

Commending the topper, Puducherry Lt. Governor Tamilisai Soundararajan has, in a press release, said it showed that students from Tamil Nadu had the capability to take competitive examinations and come out with flying colours. “I wish Oviya good luck,” she had also tweeted.

Dindigul Collector S. Visakan and Superintendent of Police V.R. Srinivasan lauded the student for the achievement.

She told The Hindu that she completed her undergraduation in B.VSc & AH in Tirunelveli. Being a national topper, she has the choice of pursuing her postgraduation either in Uttar Pradesh or in Haryana. “I am yet to take a final call,” she said, and added that she wished to take on teaching or pursue research. She had taken Animal Science in the ICAR examination.