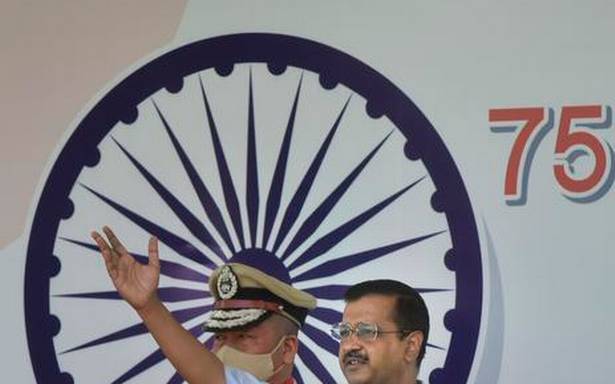 The Chief Minister also announced that preparations are underway for a Sainik School in the capital.

Chief Minister Arvind Kejriwal on August 15 announced that the Delhi government will roll out the ‘Deshbhakti’ curriculum in all State-run government schools from September 27 as a tribute to the freedom fighter Bhagat Singh.

During his Independence Day address at the Delhi Secretariat, he also announced that the national capital will soon get its first Sainik School and a preparatory academy to groom students for the armed forces.

“Over the last 74 years, students have been taught physics, chemistry, maths, history, geography and other subjects but not patriotism since it is assumed that they will develop a feeling of love for their country,” Mr. Kejriwal said.

“On the occasion of the 75th Independence Day, the Delhi government is going to make this beginning. Under the ‘Deshbhakti’ curriculum, students will be inspired to feel proud of their nation,” he added.

The curriculum, Mr. Kejriwal said, will not be based on rote learning and there will be no tests.

"It will be activity based and students will be told stories about independence and the nation’s pride. Children will be made to realise their responsibilities and duties towards the country,” the Chief Minister explained.

"They will be prepared to fulfil their responsibilities and contribute towards the nation’s progress. They will also be prepared in a way that if the need arises, they can lay down their lives for the nation and be willing to give their all to the country," he said.

Calling it a tribute to Shaheed Bhagat Singh, Mr. Kejriwal elaborated, "Shaheed Bhagat Singh made a supreme sacrifice. At the age of 23, the young man was hanged and he embraced it without any complaint. His entire life is an inspiration. He not only inspired the people of his generation but even the future generations. This is our tribute to him”.

Expressing hope that, the curriculum will be taught in schools across the country in the future, Mr. Kejriwal said, "I call upon parents… when your child comes back from school, talk to them about the country and ask them what they were taught on patriotism. This will not only inspire the students but also their parents”.

"Let’s all come together on the occasion of 75th Independence Day and fill the entire nation with the spirit of patriotism… We will have a bright future if we prepare the children today," he added.

Mr. Kejriwal also said his government has begun preparations to give Delhi its first Sainik School.

"Every State has its own Sainik School except Delhi. We have begun preparations to open Delhi’s first Sainik School," he said.

"Preparations have also begun to open an armed forces preparatory academy. In this academy, along with studies, students will be prepared for the NDA and the armed forces. They will be provided with every kind of training and coaching so that a majority of Delhi’s children can join the armed forces," he said.

Mr. Kejriwal had announced the vision for the ‘Deshbhakti’ curriculum on the 73rd Independence Day in 2019.

The framework of the ‘Deshbhakti’ curriculum submitted by a government-appointed panel was approved by the Governing Council of the State Council of Educational Research And Training (SCERT) on August 6, and a copy of curriculum framework was presented to Mr. Kejriwal on August 14.