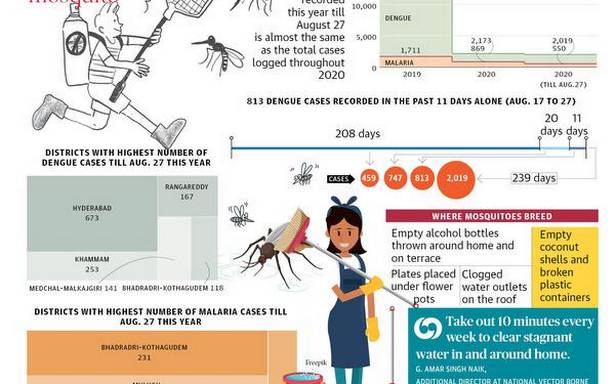 813 cases recorded in past 11 days alone

In all probability, the number of dengue cases in Telangana this year will surpass last year’s total of 2,173. For, the cases recorded in eight months of 2021 (till August 27) have already touched 2,019.

Monsoon rains continue to lash the State, and the season is known to create conditions suitable for rapid mosquito breeding, thanks to increased water stagnation points. With that, vector-borne diseases invariably see a spurt.

People in urban localities have to be more cautious regarding vector-borne diseases. Among the 33 districts, the highest number of dengue patients were detected in urban districts. Hyderabad, Rangareddy and Medchal-Malkajgiri accounted for 48.5% of the total 2,091 dengue patients in the State. Khammam recorded 253 cases while Kothagudem logged 118.

In case of malaria, the highest number of cases have been witnessed in Bhadradri-Kothagudem and Mulugu. Of the total 550 malaria patients, 65% belonged to the two rural districts.