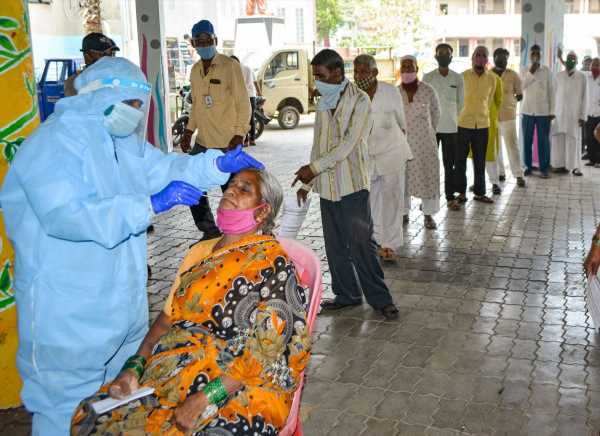 One challenge for many laboratories in ramping up is the shortage of trained manpower for collecting samples, report Sohini Das, Vinay Umarji and Virendra Singh Rawat.

Abhishek Ghosh (name changed) is flying to Canada this week from Mumbai to start a new job. Before boarding the flight, he has to get an RT-PCR test to show he is negative for Covid-19. On Monday, most laboratories in Mumbai were refusing to collect his sample, neither from home nor even from the collection centre he visited to deposit his sample when no one would come home.

Of the around one million RT-PCR tests conducted per day nationwide, around 50 per cent are at private labs. Last April, the share of private labs was only around 10 per cent. As the pandemic progressed, they scaled up to cope with the first wave. But around January, with the caseload falling significantly, capacity utilisation dropped to 20 per cent or so.

Now demand is growing almost 100 per cent week-on-week, leading to a testing crisis, said an industry insider. In Mumbai, several diagnostic laboratories such as SRL Diagnostics were not able to process samples due to huge loads. A query to SRL Diagnostics remained unanswered.

The owner of a leading chain pointed out several reasons for the delays.

“We have been asked by the city’s civic body to not process samples beyond our processing capacity and not to delay test results beyond 24-hours. This has led to several of our collection points temporarily stopping collections over the last weekend. It was temporarily halted due to processing overload,” said the owner who did not wish to be named.

The Municipal Corporation of Greater Mumbai has asked diagnostic laboratories, who are expected to check if those turning up for testing have any symptoms or not, to prioritise testing the symptomatic.

The scope of those who need to get tested regularly because of their work is wide. E-commerce companies and firms with delivery staff have to get RT-PCR reports as they are likely to spread the virus owing to their high mobility.

Added to this are those who are flying in or out of the city. “These people too have a genuine need for testing and we cannot turn them away because they are asymptomatic. The government’s mandate itself is complicating things,” said the lab chain owner quoted above.

Laboratories have started ramping up capacities.

Ameera Shah, MD and promoter of Metropolis Healthcare, said her company has doubled its capacity this week but refrained from giving the exact capacity, citing commercial sensitivity.

However, she said that sample collection through walk-ins had to increase to reduce the delay in processing. “Home collection will always be difficult to ramp up because it needs trained phlebotomists and is more time-consuming. Walk-ins should be encouraged now,” she said.

In Ahmedabad, Neuberg Supratech of Neuberg Diagnostics Private Limited has launched a drive-through testing facility in collaboration with Ahmedabad Municipal Corporation at one of the grounds in the city.

Backed by software developed by Sufalam Solutions, the facility has been launched with 10 collection stations dispersed over the grounds. Neuberg Diagnostics’ COO Aishwarya Vasudevan said the company had ‘ramped up the tests in a short period of time’.

Passengers and drivers can have an RT-PCR test quickly without having to get out of their cars for Rs 800. A nasal or throat swab sample is taken through the car window and the entire process takes approximately 10 minutes, with reports being generated within 24-36 hours. The first day of the drive-through facility saw over 2,000 people being tested in an 11-hour window.

Currently, 150,000 RT-PCR tests per day are being conducted across 93 laboratories in Gujarat. Forty more laboratories are to be added soon. On Monday, Gujarat Chief Justice Vikram Nath pulled up the state government over the handling of the situation, including delayed test results.

One challenge for many laboratories in ramping up is the shortage of trained manpower for collecting samples. Thyrocare Lab chairman and promoter A Velumani called it a ‘limiting’ factor.

Given the steep rise in fresh infections, the Uttar Pradesh government is targeting to ramp up RT-PCR testing from about 90,000 per day at present to 150,000 soon.