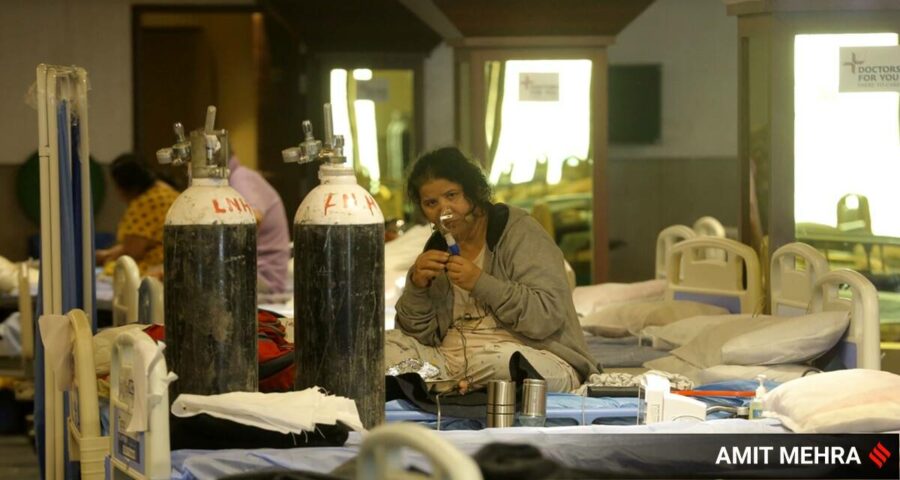 To deal with this acute crisis, Delhi government worked out usage and projected requirements of each hospital. Lethal and unrelenting, this current wave of Covid has been far worse than the last one. On April 14, the single-day number of new Covid-positive cases jumped to 17,000 in Delhi. A few days later, on April 20, the total number of new cases was more than 28,000, taking the number of all active cases to almost one lakh. About 20 per cent of the positive cases were admitted to hospital. Almost 25 per cent of those were in the ICU. Today, a month later, we can cautiously say that this wave is receding; the number of new cases has declined to its lowest in the last 40 days.

Why was there a rush for hospitals this time? My sense after talking to doctors is that, perhaps, this strain was very different. A dip in saturation level to below 90 in more cases resulted in a higher number of patients needing hospitalisation with oxygen support.

Let us try to understand Delhi’s challenge with oxygen.

Before April 14, the total daily oxygen requirement of all Delhi hospitals was between 178-220 metric tonne (MT). Hospitals had direct contracts with suppliers. On April 15, a day after the surge began, Delhi’s hospitals requisitioned their increased demand and secured 325 MT of oxygen from their regular suppliers. However, due to the increase in demand all over the country, the Government of India rightly stepped in and allocated plants and quota for lifting oxygen among states.

Delhi’s quota was fixed by the Centre at 300 MT. By the time the quota was raised to 590 MT on May 1, the requirement of Delhi had already gone up to 700 MT. Moreover, this allocation was to be sourced from 13 plants spread across seven states, of which nearly 34 per cent was to be from Odisha, Jharkhand and West Bengal, which had no pre-existing oxygen supply chain with Delhi.

It was a peculiar situation where manufacturers were ready to raise production and railways was ready to run as many trains as required but there simply were not enough tankers and containers in India to ensure regular transportation. The situation was further aggravated, when some manufacturing states appropriated the tankers registered in their states even if they did not need them immediately.

Delhi faced multiple challenges that most other states did not. First, Delhi does not manufacture oxygen and, therefore, is completely dependent upon other states. Second, it could manoeuvre only 17 tankers of approximately 20 MT each from refillers operating in its territory. Third, instead of being able to procure the allotted quota from plants in neighbouring states which had pre-existing supply chains with Delhi, new locations like Rourkela, Jamshedpur, Durgapur, Jharsuguda and Kalinganagar were assigned to Delhi. A train from these locations takes 30-36 hours to reach Delhi.

To deal with this acute crisis, Delhi government worked out usage and projected requirements of each hospital through a series of meetings led by Chief Minister Arvind Kejriwal. Government lawyers impressed upon Delhi High Court to give direction to the Centre to ensure 700 MT of regular supply to Delhi. Monitored by the Supreme Court, officials from the central government, including those from Indian Railways, and Delhi government worked as a team to prevent serious shortfall on any day. Manish Sisodia and Satyendra Jain visited hospitals regularly to understand their challenges and encourage judicious use of oxygen.

Two critical operations — bringing oxygen into Delhi, and distributing it among hospitals were led by two young IAS officers, Udit Prakash and Vijay Bidhuri. While there are many heroes in Delhi’s quest for oxygen, these two are certainly the “saviours of life”.

Prakash led the supply chain management. Officers of the Delhi government were stationed at the plant along with a team from the Delhi police to get the tankers filled in time and escorted back. A roster for every tanker was prepared to maximise the effectiveness of the trips. The supply coming by train needed to be decanted quickly and sent back for the next round. Imported from different countries, containers often have different nozzles, thus requiring entirely new sets of equipment to open them. Tankers arriving at Delhi Cantonment station could not be decanted there due to space constraints; therefore, a quick arrangement was made with the help of the Indian Army to use its ground for decanting.

Once the tankers entered Delhi, the distribution team led by Bidhuri took charge. Being MD of Delhi Transport Corporation, he involved his officers to plan the routes. DTC bus drivers boarded the tankers as backup and PCR of the Delhi police cleared the road for movement within the city.

Until May 4, when the supply stabilised, the team in the control room had hardly slept. Responding to SOS calls on the helpline round the clock, the team estimated each hospital’s reserve, calculated the time left for its tanks to dry up and rushed oxygen to them in case the scheduled supply was likely to be delayed.

In the midst of despair, we look for hope. In last few days, Delhi government has managed to create a 300 MT buffer stock of oxygen. Static cryogenic containers are being procured for storage at three government hospitals and procurement of about 10 tankers of 20 MT each for future exigencies is being planned.

Going forward, we need to be prepared for what different strains of Covid may bring. This time it was oxygen. What will it be next time?

This column first appeared in the print edition on May 19, 2021 under the title ‘When O2 ran out’. The writer is education advisor, Delhi government. During the current wave of Covid-19, he worked closely with the Oxygen Control Room of the Delhi government. Views are personal.