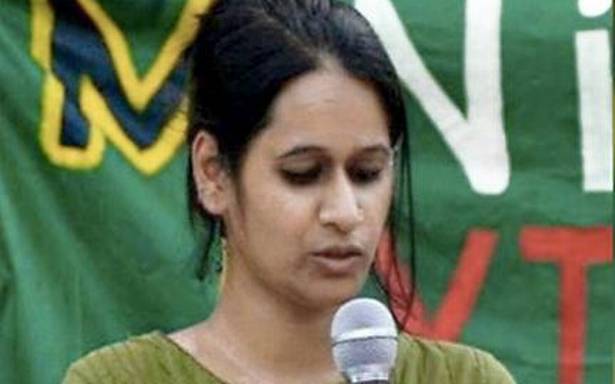 The former JNU student’s father died of COVID-19 on Sunday and she is the only family member who could conduct the cremation and last rites as her brother is in self-isolation.

The Delhi High Court on Monday granted three weeks interim bail to former Jawaharlal Nehru University (JNU) student Natasha Narwal, arrested in connection with the north-east Delhi riots, to perform the last rites of her father who died of COVID-19 on Sunday.

The court took note of the fact that deceased Mahavir Narwal was survived by a son, who himself is in self-isolation due to the pandemic, and that Ms. Natasha was the only family member who could conduct the cremation and last rites.

The court was also informed that the deceased’s body was at a hospital in the city.

As a condition for her interim bail, the High Court ordered Ms. Natasha to provide her phone number to the local Station House Officer and to keep the mobile phone active at all times. It also noted the concern raised by the police that she should not comment or tweet on the pending trial while on interim bail.

At the time of surrender, Ms. Natasha will have to furnish to the jail authorities a copy of her RT-PCR test report.

Ms. Natasha, booked under the stringent Unlawful Activities (Prevention) Act, was arrested on May 23 last year along with fellow JNU student Devangana Kalita in relation with an FIR registered on February 24 over the sit-in protest at Jafrabad Metro Station against the Citizenship (Amendment) Act.

The Crime Branch has lodged a separate FIR against both Ms. Natasha and Ms. Kalita in connection with the Delhi riots with charges ranging from Section 147 (rioting), 353 (using criminal force to deter public servant from discharge of his duty), 307 (attempt to murder), 302 (murder) among others.

The FIR also named relevant Sections of the Arms Act and the Prevention of Damage to Public Property Act.