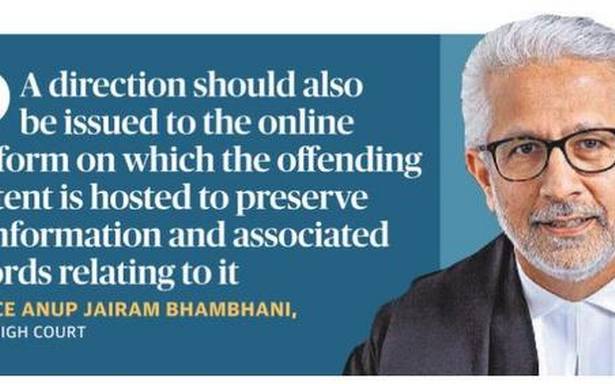 “The Internet never sleeps and the Internet never forgets,” the Delhi High Court remarked on Tuesday, while issuing a slew of directions to deal with the complications in removing offending content such as photographs and videos from pornographic websites.

Justice Anup Jairam Bhambhani said that a court, when approached with such a grievance, shall issue a direction to the website or online platform on which the offending content is hosted, to remove such content forthwith, and in any event within 24 hours of receipt of the court order.

“A direction should also be issued to the website or online platform on which the offending content is hosted to preserve all information and associated records relating to the offending content…at least for a period of 180 days…for use in investigation,” the High Court added.

The case stems from a petition by a woman who claimed that her photographs and images, though not in themselves obscene or offensive, were taken from her Facebook and Instagram accounts without her consent, and were uploaded on a pornographic website with derogatory captions added to them.

Justice Bhambhani noted, “The true enormity of this fact has dawned over the course of hearings conducted in the present matter, when it transpired that despite orders of this court, even the respondents (Internet service provider, search engines), who were willing to comply with directions issued to remove offending content from the world wide web, expressed their inability to fully and effectively remove it.”

The judge remarked that, “Errant parties merrily continued to re-post and re-direct such content from one website to another and from one online platform to another, thereby cocking-a-snook at directions issued against them in pending legal proceedings.”

Google had during the hearing stated that it has no opposition to removing access to the offending content as may be directed by the court.

Facebook, which also owns the social media platform Instagram, submitted that it has a robust privacy policy and also adopts global best practices to protect the privacy of its users to permit a safe online experience. It pointed out that though it was the woman’s allegation that her photographs and images had been taken from her Facebook/Instagram social media accounts, she does not claim any relief against Facebook/Instagram.

The woman claimed she had already filed a complaint on the National Cyber Crime Reporting Portal as well as to the jurisdictional police but to no avail. She claimed that the photographs had received some 15,000 views within a week of being posted.

Noting that a solution to the problem needed to be crafted so that legal proceedings of the nature faced by the court did turn futile, Justice Bhambhani said that for an order directing the removal or access disablement of offending content to be effective even within India, a search engine had to block the search results throughout the world.

“Even if, given the nature of the Internet, offending content cannot be completely ‘removed’ from the world wide web, offending content can be made unavailable and inaccessible by making such content ‘non-searchable’ by de-indexing and de-referencing it from the search results of the most widely used search engines, thereby serving the essential purpose of a court order almost completely,” the High Court said.