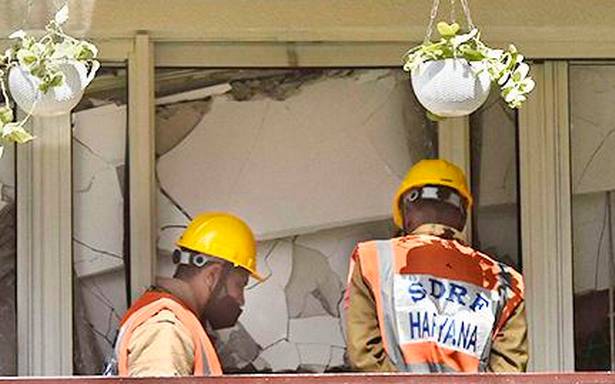 FIR registered against the developer

The death toll in the multiple flats collapse incident at Chintels Paradiso group housing society in Sector 109 here rose to two on Friday. The rescue teams pulled out the body of a woman from under the debris during a 16-hour-long rescue operation.

A first information report has been registered against the developer on charges of causing death due to negligence.

Arun Kumar Shrivastava, Managing Director of Central Warehousing Corporation, was also rescued around noon and admitted to a private hospital. He was trapped as his leg got stuck in the rubble.

The incident took place around 7.30 p.m. on Thursday when the floor slab of a living room on the sixth floor of the 18-storey building collapsed during repair. The debris fell through subsequent floors, trapping four members of two families on the first and second floors. The rest of the affected flats were vacant.

The residents blamed the poor construction quality and use of substandard materials and said that many flats had developed cracks in the walls and roofs, and tiles had also come off within five years of possession.

“In a similar incident, the plaster of a balcony had come off last year and the residents went to the police station to register a case. But the police refused to take the complaint. Later, the Department of Town and Country Planning intervened and got structural audit conducted for all the towers. But the audit agency was hired at the instance of the developer and the report was favourable to him. We were not satisfied with its findings,” said P.S. Bhatia, one of the residents.

Nikhil Rana, one of the residents in the affected “D” tower, said that repair work was a routine at the society premises since it was occupied, but there never was a permanent solution to it. “My 80-year-old grandmother had to climb down the stairs from the 18th floor after the collapse. All 32 families staying in “D” tower spent the night at the clubhouse. We are not sure how long it might take to return to our flats. We are too scared to return and no one will buy them now. We seek registration of a separate case against the developer for the financial loss and suffering,” said Mr. Rana, an advocate.

The Chintels group, in a press statement, said: “We had conducted a structural audit last year when complaints first came. We will initiate a second structural audit at the earliest. In case any defects are found in the structure, we will duly compensate the affected buyers or accommodate them in alternate arrangements while necessary repair work is completed. We are fully cooperating with the authorities and ensuring all support”.

A probe by Additional Deputy Commissioner has been ordered into the matter.