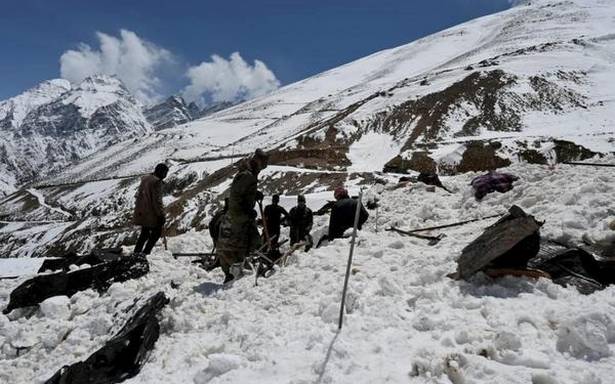 The death toll in an avalanche near the Indo-China border in Uttarakhand’s Chamoli district rose to 11 on April 25, officials said here.

Ten bodies were recovered till April 24. One more body was recovered on April 25 and a rescue operation is underway, the district disaster management office in Gopeshwar said.

Chamoli District Magistrate Swati S. Bhadauriya and Superintendent of Police Yashwant Singh have been at the spot since April 24 to monitor the rescue operations.

Uttarakhand police chief Ashok Kumar said a total of 430 BRO workers were at the road construction site when the avalanche occurred on April 23.

Sumna, where the avalanche occurred, is approximately 25 km from Malari village and located near the confluence of the Girthigad and the Kiogad, two streams that originate from the Dhauli Ganga river, which witnessed a calamitous avalanche in February, killing 80 people and leaving 126 missing.

A part of the Nanda Devi glacier broke off in Chamoli on February 7, leading to massive floods, recalling a 2019 study that warned about the dangers of climate change and said Himalayan glaciers have been melting twice as fast since the start of this century.

The glacier collapse at Joshimath led to a massive flood in the Alaknanda river system and caused large-scale devastation in the upper reaches of the ecologically fragile Himalayas.

In June 2019, a study spanning 40 years of satellite observations across India, China, Nepal and Bhutan, indicated that climate change is eating the Himalayas’ glaciers.

The study, published in the journal Science Advances, shows that glaciers have been losing the equivalent of more than a vertical foot and half of the ice each year since 2000 — double the amount of melting that took place from 1975 to 2000.