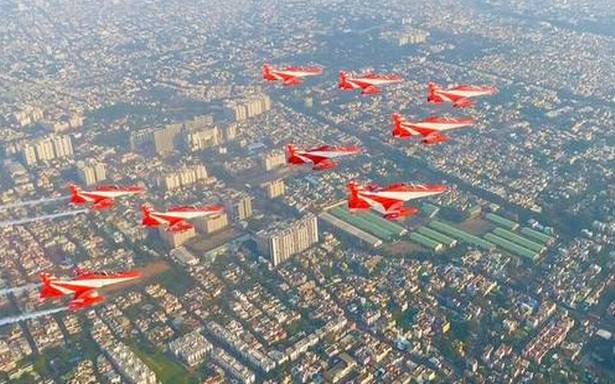 The Suryakiran aerobatic display team of the Indian Air Force (IAF), which has enthralled crowds across the country with their hair-raising manoeuvres with their aircraft in red and white, has just completed 25 years.

One of the few nine aircraft display teams in the world and the only one in Asia, the team has carried out over 600 displays across the country and south east Asia.

The team currently has 13 pilots and is led by Group Captain Anoop Singh.

“Suryakiran”, which means ‘rays of the sun’ in Sanskrit, was raised in May 27, 1996, at the IAF air base in Bidar, Karnataka, with six Kiran MkII trainer aircraft. It carried out its first display on September 15, 1996 for the golden jubilee celebrations of the Air Force Administrative College in Coimbatore. However, the team was disbanded in 2011 after the Aero India show due to shortage of training aircraft in the IAF and was resurrected in 2015 on advanced jet trainer Hawk Mk-132 aircraft.

The team was built up to a nine-aircraft team in quick time in 2017, the officer observed and added, “We got smoke pods in 2020 and commenced display with smoke.”

All the pilots of the Suryakiran team are qualified flying instructors and belong to the fighter stream of the IAF selected through a rigorous selection process at a ratio usually around 1:10. “They all have a high level of experience and proficiency on various frontline fighter aircraft,” the officer stated.

The Suryakiran team firmly believes in ‘excite the ordinary, impress the knowledgeable, and frighten no one’, said Wing Commander Venu Nambisan (retd), a former AN-32 navigator and Suryakiran team administrator. “The Suryakiran team conducts its display to motivate young students to take up a career in the armed forces and to reassure the citizens of the superior flying skills and discipline of the nation’s air warriors,” he told The Hindu.

Wg. Cdr. Nambisan, who had been a fan of the Suryakirans since his cadet days, said, “Having been allotted the transport stream as navigator, my hopes of joining the team were dashed. So when the team sent out a call for team administrator, I jumped at the opportunity.”

“Not once, but twice,” said Wg. Cdr. Nambisan, who was part of the legacy team and part of the core team which resurrected the team on Hawks later. “A rare privilege indeed,” he said.

This team, which has been the brand ambassador of the IAF, is also the 52 squadron of the IAF and is the youngest fighter squadron with the motto “Always the Best”.