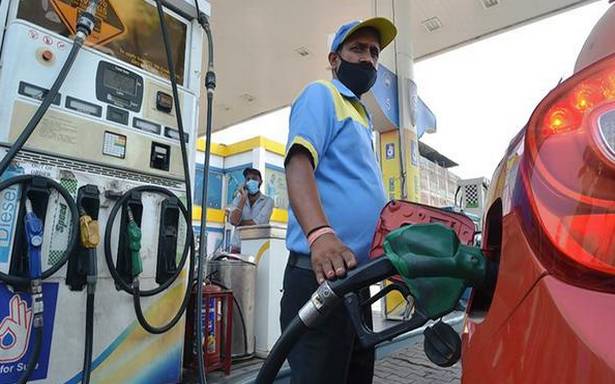 The Centre has raked in nearly Rs.16 lakh crore through excise duty on petroleum products between FY15 and FY21

In India, crude oil prices have risen to a near three-year high. Subsequently, the retail prices of petrol and diesel, which were already high due to heavy tax rates, became higher in India. Notably, in recent times, whenever crude prices have been on the rise, the burden has been passed on to Indian consumers. However, when crude prices dropped, the Centre’s excise duty was increased in proportion and consumers continued to pay more. In contrast, the State’s share of taxes has not moved much. The Centre has raked in nearly ₹16 lakh crore through excise duty on petroleum products between FY15 and FY21. And now that fuel consumption is resuming to pre-pandemic levels, consumers may have pay more.

The Centre’s excise duty is a major reason for the surge in retail price in recent times. While the States’ share in retail price has remained steady, the Centre’s has increased many times after late 2014. Excise duty was revised sharply upward in 2020 when crude prices crashed due to a fall in demand because of the pandemic. The hike in excise duty continues in 2021, even as the crude price is on the rise.

The chart depicts India’s average crude imports (right axis) and the average consumption of petrol and high-speed diesel in India. While imports have significantly recovered from the pandemic lows, they are yet to reach the pre-pandemic levels due to local movement restrictions. At the same time, while the demand for petrol has improved, the consumption of high-speed diesel has not picked up.

The chart shows the revenue earned by the Centre and States through excise duty and VAT, respectively, on petrol and petroleum products. The Centre’s revenue rose sharply in FY2021 after the hike in excise duty. It collected ₹3.7 lakh crore in FY21. The States’ collections stood at ₹2 lakh crore.