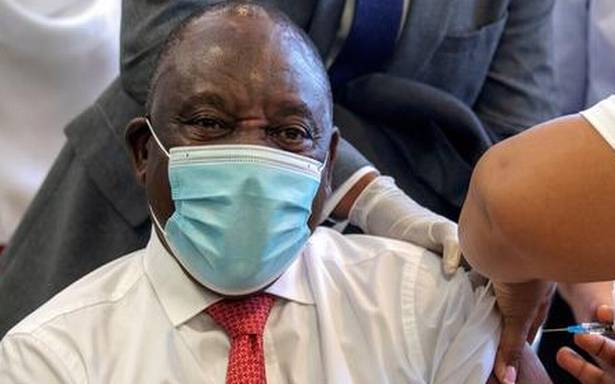 Due to wide disparity in vaccine supply, of the 52 countries in Africa, 38 have given at least one dose to <5% of population

Low-income countries have received only 0.27% of the COVID-19 doses administered worldwide while high-income countries (30%) and upper-middle-income countries (52%) have acquired more than 80%. Of the 27 nations termed as low-income, 23 are in Africa. Due to this wide disparity in vaccine supply, of the 52 countries in Africa, 38 have given at least one dose to <5% of population. Worryingly, many African countries have recorded a recent uptick in cases, most of which were due to the highly transmissible Delta variant.

The map depicts the biweekly change in COVID-19 infections and the table lists the share of the Delta variant in cases sequenced in select African countries. Africa’s share in global cases has remained low for a large part of the pandemic. However, since June, sharp spikes were recorded across many countries in the continent. For instance, Botswana and Algeria recorded a biweekly growth of 119% and 134% in new cases.

■ South Africa and Tunisia, which have been contributing the most cases in Africa recently, have administered at least one dose to 7.6% and 13.5% of their populations, respectively.

■ Nigeria and Ethiopia, which are highly populated countries, have administered at least one dose to only 1.2% and 1.9% of their populations, respectively.

■ In Chad, the Democratic Republic of Congo (370 avg. cases per day at its peak), Burkina Faso, Benin, South Sudan, Madagascar (600 cases/day at its peak) and Mali (207 cases/day), less than 1% of the population has been administered at least one dose.