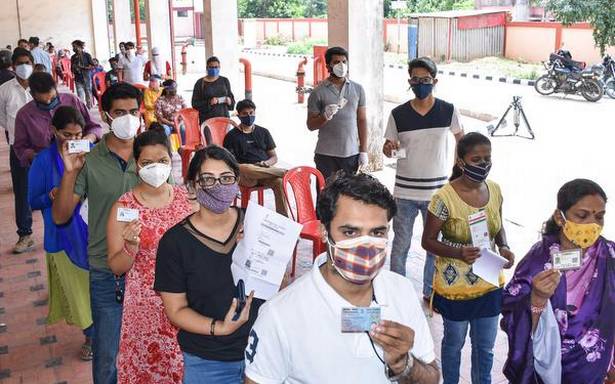 The 21 crore vaccine doses received till May 24 are enough to vaccinate only 22.4% of adult population

Despite India allowing COVID-19 vaccination for all adults, the number of doses administered dropped significantly in May. Between May 11 and 20, only 1.57 million doses were administered per day on average, lower than the 1.77 million administered in the previous 10-day period. If India has to vaccinate its adult population by the end of 2021, the average daily dose has to increase to at least 7.5 million. Reduction in the daily doses in Gujarat, Andhra Pradesh, Punjab, Telangana and Jammu and Kashmir led to the drop in India’s pace in the latest period.

The average daily vaccination rate in India further reduced between May 11 and 20. The daily rate fell below 1.5 million doses on May 19 and 20.

The chart shows average daily doses administered between May 1-10 and May 11-19 in major States.

However, data show that low vaccinations is due to limited supply. The Centre had supplied* over 21 crore vaccine doses to the States until
8 a.m. on May 24. This is enough to administer a single dose to only about 22.4% of India’s adult population. The States continue to utilise over 90% of the doses supplied by the Centre, indicating a high demand for vaccines. However, due to inadequate supply, only close to 4.5% of adults had received both the doses.

The chart depicts the doses administered by major States as a % of doses received from the Centre as of May 24 and May 11 . In no State did the utilisation % drop below 80%. Overall, 91.4% of the 21 crore doses supplied to all the States/UTs were utilised as of May 24.

*A small portion of it is still in the pipeline