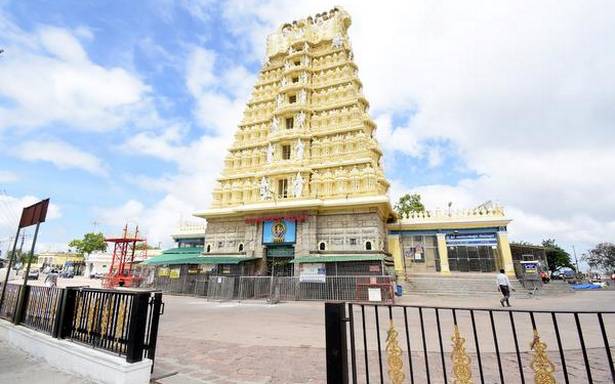 Temple authorities were expecting over 60,000 devotees on each Ashada Friday and expressed difficulty in ensuring social distancing

Chamundi Hills will be out of bounds for devotees and visitors on Fridays, Saturdays, Sundays and general holidays during Ashada season. The Mysuru district administration has imposed restrictions on entry to Chamundeshwari yemple atop Chamundi Hills and Jwalatripura Sundari temple at Uttanahalli near the foothills during this period.

Apart from restrictions on entry to the temples on Fridays of Ashada and two Amavasyas, the district administration has prohibited entry of devotees and general public on Saturdays, Sundays and general holidays.

The curbs have been imposed to prevent spread of COVID-19 and protect the health of the general public.

Routine religious rituals and customs are, however, permitted to be carried out by the temple’s officials and priests within the temple premises.

The order made it clear that entry to Chamundi Hills through the steps has been prohibited during the period.

Similar restrictions on entry to Chamundeshwari temple were in place during Ashada 2020 too.

The curbs were announced after the Executive Officer of Chamundeshwari temple said they were expecting between 60,000 and 100,000 devotees on each Ashada Friday while expressing difficulty in maintaining social distancing required to prevent the spread of COVID-19 when crowds gather in such large numbers.

Temple authorities had pointed out that a large number of people visited on Saturdays and Sundays, besides general holidays while seeking the opinion of the district administration on allowing devotees during the month of Ashada.

The Deputy Commissioner, in an order dated July 5, invoked provisions under Rule 12 of Karnataka Epidemic Diseases (COVID-19) Regulation 2020 and various provisions of Disaster Management Act 2005 to impose the restrictions on entry to Chamundeshwari temple and Jwalatripura Sundari temple at Uttanahalli.