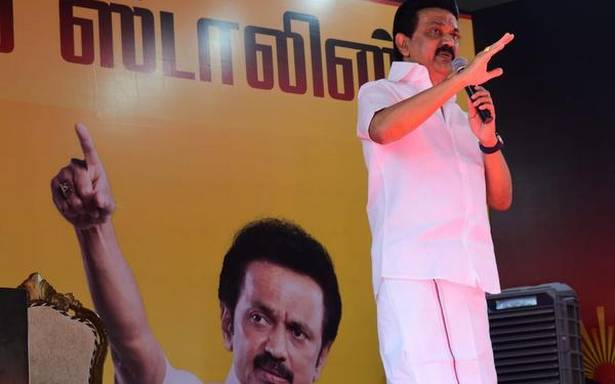 DMK president M.K. Stalin has said the Tamil Nadu government’s crop loan waiver announcement has been made only for the benefit of AIADMK men, who had availed of loans from cooperative societies in large numbers.

“It is not for the benefit of the real farmers,” Mr. Stalin alleged while addressing a meeting organised here on Sunday, as part of the ‘Stalin in your constituency’ event. He said the government “enacted a similar drama” in 2016 also wherein it was announced that farmers with up to 5 acres of land would get their crop loans from cooperative societies waived.

When the Movement for Linking South Indian Rivers approached the Madurai Bench of Madras High Court seeking a crop loan waiver for all the farmers, the Court allowed their prayer. “However, the State government, while exerting pressure on the borrowers to repay the loan with interest, appealed against this in the Supreme Court. Now, with an eye on the Assembly polls and for the benefit of the AIADMK men, Mr. Palaniswami has come out with the crop loan waiver,” Mr. Stalin charged.

Recalling that his father and then Chief Minister M. Karunanidhi signed the order waiving a ₹7,000 crore crop loan immediately after assuming office in 2006, the DMK president said Mr. Palaniswami had only made the announcement and the formal Government Order in this connection was yet to be signed. He claimed that the late M.G. Ramachandran, when he was in the DMK, was impressed with the party-related works of Mr. Stalin and wanted the family of Karunanidhi to be protected for the welfare of Tamil Nadu.

Mr. Stalin appealed to the voters to join hands with the DMK “to salvage the problem-ridden Tamil Nadu” as the present AIADMK government had miserably failed to solve the problems of even the home districts of the Chief Minister and the Deputy Chief Minister.

Coming down heavily on Minister for Adi Dravida Welfare V.M. Rajalakshmi, representing Sankarankovil (Reserved) Assembly constituency, Mr. Stalin said she had done nothing for the welfare of the students of Scheduled Castes and Scheduled Tribes, whose scholarship amount had been reduced by the Union Governmnt.