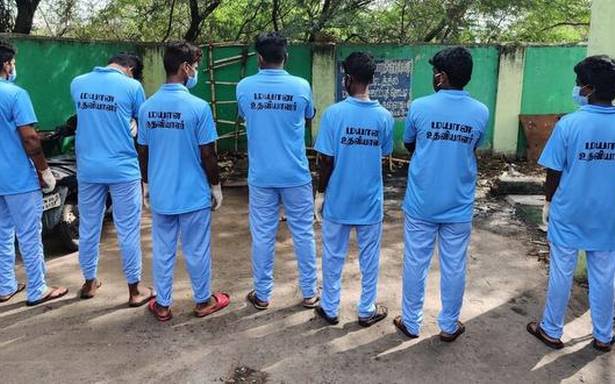 Chennai Corporation officials said there had been complaints about anti-social elements and conmen at the crematoria, who were bothering grieving families; ID cards and CCTV to come in soon

In a move to help the relatives of COVID-19 victims who accompany bodies to crematoria and to prevent them from getting cheated by anti-social elements, the Greater Chennai Corporation has provided specially-designed uniforms for the helpers in crematoriums in the city’s south region.

There are 92 crematorium in zones 11 to 15, falling under the south region of the GCC. Out of these, 13 are gasifiers, LPG and electrical. The remaining are conventional ones. At present, most COVID-19 victims are cremated using the gasifier, electrical or LPG methods.

“We received some complaints that anti-social elements or non-employees are loitering about and creating a nuisance. Hence we decided to come up with the uniform for the staff in the crematoriums so that the public can easily identify them and not fall prey to conmen,” said Rajgopal Sunkara, Regional Deputy Commissioner, South.

As of now, 72 staff members have been given the blue jersey and shorts with the words – Crematorium Helper – written on the back. “We have also given them gloves and masks. They will also be wearing identity cards. Earlier, the cremation was allowed only till 6 p.m. Now people come till 10.30 p.m. and many women relatives are also coming. Hence we wanted them to identify our staff easily,” said R. Balasubrmanian, SE, South Region.

Mr. Balasubramanian along with R. Subash, executive engineer, zone 13, designed the uniforms. “We chose the colour blue as we wanted it to stand out from other colours,” added Mr. Subash.

Mr. Sunkara hoped that the uniform with ID card would help the public in distinguishing one person from another. “We also have CCTVs being set up. We can monitor the movement of anti-social elements. This is just another initiative to make the last journey a peaceful experience,” he said.