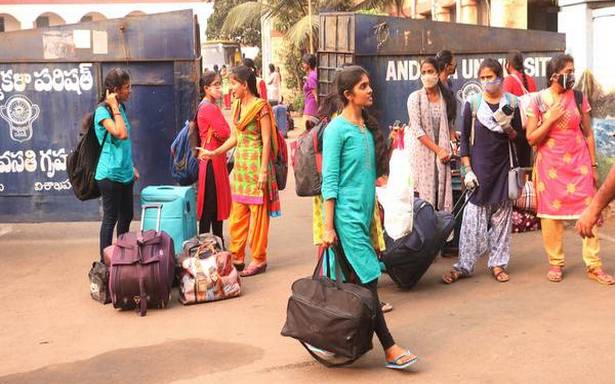 Four medical teams are at the university, says DMHO

The total number of COVID-19 cases from the engineering campus of Andhra University crossed the 100-mark and stands at 102 as on Sunday morning, according to the Health Department officials.

District Medical & Health Officer P. Suryanarayana said that out of 102 cases, 96 are boys, five are faculty and one from the girls hostel. Almost all the reports are out and a very few are yet to be received, he said. The DMHO also said that most of the students are asymptomatic, while a few are suffering from mild fever. He also said that there are four medical teams including doctors, nurses and staff at the varsity to keep a watch on the students.

Tourism Minister M. Srinivasa Rao visited the campus on Sunday and enquired about the facilities being provided. Mr. Suryanarayana and Joint Collector Arun Babu informed him about the precautions being taken. The Minister also had a meeting with Vice-Chancellor P.V.G.D. Prasad Reddy and engineering college officials.

Addressing the media, Mr. Srinivasa Rao said that students were given separate isolation blocks and were provided COVID-19 kits. He said that students do not have any symptoms and parents need not worry. He assured that medical teams would be made available at the university campus round the clock. If students face any inconvenience, they would be shifted to hospital. King George Hospital (KGH) and Visakha Institute of Medical Sciences (VIMS) have been equipped with all the facilities for treatment. He also appealed people to wear face masks while going out and to follow safety norms, in the wake of increase in cases.

Meanwhile, students from various other hostels of Andhra University have started to leave for their homes on Sunday morning. Many students have opted to travel in own vehicles rather than choosing public transport.