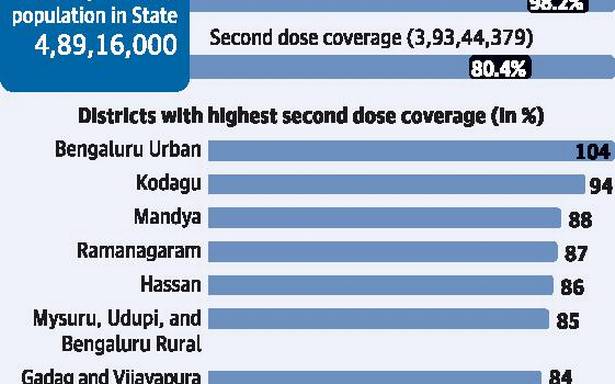 Over 80% of the adult population in Karnataka is now fully vaccinated. With this, Karnataka now stands third in the country – after Madhya Pradesh and Gujarat – in terms of second dose coverage among large States.

While it is still a challenging task for the State Health Department to cover the remaining population, officials said the second dose coverage picked up in the last one month, mainly owing to the Omicron scare.

From 51% on November 16, second dose coverage in the State shot up to cross 80% on Thursday. The first dose coverage has crossed 98% with 4.8 crore the 4.89 crore eligible adult population been covered.

State health officials, who admitted that they were finding it hard to sensitise people to get vaccinated till November, said people were reluctant to get vaccinated mainly because the number of new COVID-19 cases had reduced drastically. Now the demand has picked up again following a surge in cases.

According to data from CoWIN and the State Health Department, the second dose coverage in 17 of the 31 districts is above the State average of 80.4%. Bengaluru Urban (excluding BBMP), which was the first district in Karnataka to achieve 100% second dose coverage on December 23, has exceeded its target by 4%. Officials said this was due to the floating population in the district.

BBMP, which has an eligible population of 91,70,000, has achieved 77% second dose coverage. The first dose coverage here is the least at 93%.

Arundhathi Chandrashekar, State Mission Director, National Health Mission, said there is an urgency among people now to get vaccinated as cases are surging. “As of Thursday, we still have 41.8 lakh people due for the second dose. It is a challenge to cover the remaining population mainly because of migration. Now, following directions from the Government of India, we are contacting those who are due for the second dose and asking them to take the jab wherever they are. With the requirement of mandatory vaccination in many activities, we are hoping more people will soon come forward and get vaccinated,” she said.

“Another problem is a technical issue. Many, especially in rural areas, would have given a different number for the first dose and taken the second dose with a different number. According to our estimates, nearly half of the remaining population who have to get their second dose could have already taken it with another number. There are still many who are hesitant to get vaccinated as they would have developed minor adverse events after the first dose,” the official explained.

Health and Medical Education Minister K. Sudhakar said the State is confident of crossing 90% second dose coverage by the end of January. “The second dose is bound by the 12 week (84 days) interval and hence we have to go by it,” he said.

“We had committed that we would complete vaccination by December 31 and we are pretty much there. We have achieved 98% first dose coverage. The last few lakhs are the most difficult ones and we are hopeful that we will achieve cent per cent in the next few weeks,” he said.