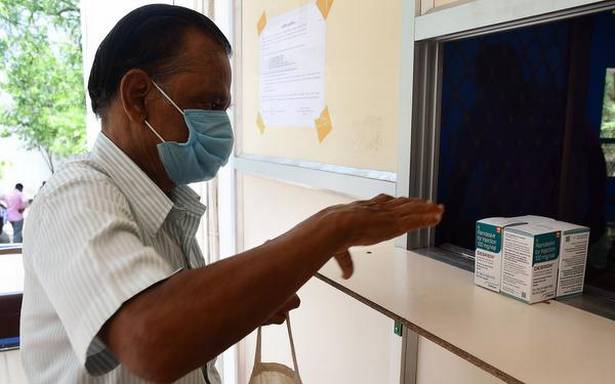 The Centre on Monday told the Madras High Court that seven Indian licensees of patented anti-viral drug Remdesivir were manufacturing only 27 lakh vials a month as on April 1 this year though their installed capacity was 38.80 lakh a month. Now, due to the surge in COVID-19 cases in certain parts of the country, the Drugs Controller General of India (DGCI) has permitted them to produce 1.19 crore vials a month.

Appearing before the first Division Bench of Chief Justice Sanjib Banerjee and Justice Senthilkumar Ramamoorthy, Additional Solicitor General (ASG) R. Sankaranarayanan said the patent for Remdesivir was held by Gilead of the United States and only seven Indian companies were manufacturing the drug here under licence agreements. The DGCI ,V.G. Somani, jumped into action immediately when the demand for the drug increased recently.

In order to enhance the production capacity of the seven licensed manufacturers, the DGCI approved 35 additional manufacturing sites apart from the 22 that were already in existence. It resulted in enhanced manufacturing capacity of 70 lakh vials as on April 23 and 1.19 crore vials as on May 15. Consequently, the Centre increased the allocation of Remdesivir to 53 lakh vials to various States for the period between April 21 and May 16.

Further, the Directorate General of Foreign Trade (DGFT) had prohibited the export of Remdesivir as well as its Active Pharmaceutical Ingredients (API). All the export-oriented units of Mylan and Honour Lab, which manufacture the drug on behalf of the seven licensees, had been directed to start manufacturing the drug for domestic supplies so that the drug could be made available in sufficient quantity in the country.

“The government is also making all efforts to address the supplies of essential inputs, raw materials such as APIs etcetera to ensure that the installed capacities are fully utilised. The Department of Pharmaceuticals and the Ministry of External Affairs [MEA] are closely supporting sourcing of raw materials to ensure optimum production levels of Remdesivir in the country,” Mr. Sankaranarayanan told the court.

In addition, the Union Ministry of Health and Family Welfare was also procuring Remdesivir from other countries. The Ministry had written to the MEA on May 3 for exploring all possible options for importing the drug through Indian missions abroad. “The MEA is placing orders for procuring 3 lakh doses of Remdesivir from a company, Eva Pharma in Egypt, and the supplies would be in the end of May,” the ASG said.

On the other hand, India was completely dependent on imports with respect to critical care drug Tocilizumab, the ASG said, referring to a report submitted by the DGCI and added that only limited stocks were being imported. Nevertheless, he added that there were other alternative drugs produced domestically. He said drugs such as Itulizumab, Dexamethasone and Methyl Prednisolone were either equivalent to or better than Tocilizumab.