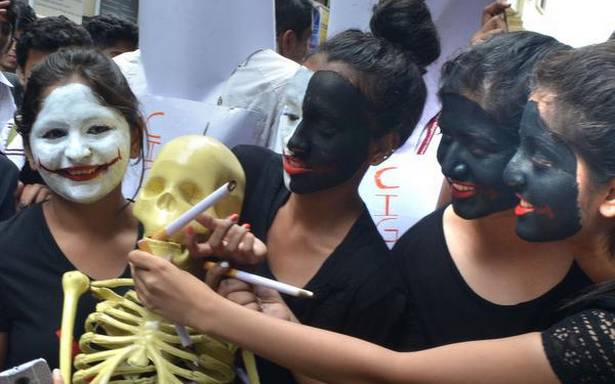 Amid the second wave of COVID-19, it is now widely recognised that tobacco use is associated with a greater risk to the infection, more complications, and a greater chance of death as a consequence. COVID-19 has laid bare to us the importance of healthy lungs and easy breathing.

However, even before COVID-19, smoking was the most important causative factor for chronic obstructive pulmonary disease, a condition in which every breath can be a huge effort. Tobacco does not only kill, it also causes a plethora of diseases, leading to years of suffering for some moments of pleasure or relief. India is the second largest consumer of tobacco and the third largest producer of tobacco in the world. More than one in 10 of the world’s smokers lives in India, and one in 10 deaths annually — roughly 10 million — are attributable to tobacco. India also accounts for 70% of the world’s deaths due to smokeless tobacco (SLT) use.

Despite a 7% reduction in the use of tobacco in India, as reflected in the Global Adult Tobacco Survey 2 (GATS 2) in 2016-2017 from GATS 1 (2009-2010), 43% of males and 14% of females — translating to nearly 267 million adults — still use tobacco. India has the dual burden of both smoking and smokeless forms of tobacco. Studies suggest a downward trend in the age of initiation of tobacco use and a rising prevalence among girls.

It is estimated that more than half the regular tobacco users want to quit, but very few try, either because they think their tobacco use is not too much of a problem or because they are apprehensive of withdrawal symptoms. There is also a concern about the perceived fear of losing their tobacco-using friends.

But the benefits of quitting tobacco are apparent fairly soon after quitting. Apart from better breath and improved oral hygiene, oxygen levels in the blood improve in a few hours, smell and taste improve, and blood circulation and lung function improve in a few weeks to months. While the risks of lung cancer, coronary heart disease, and stroke take many years to be comparable to the general population, these risks are halved in about one to five years of stopping.

To help those who wish to quit, tobacco cessation clinics have been set up at many health care settings. It is heartening that tobacco users are now reaching out, particularly during the pandemic, expressing a desire to quit and requesting support. Fortuitously, even before the pandemic, digital technology was in use to reach out to lakhs of tobacco users, particularly those who could not access to tobacco cessation facilities. This includes the mCessation programme, available through the National Health Portal, where users can register by giving a missed call on 011-22901701 or register through the portal. There are also a spate of devices and apps to support quitting smoking.

For people who like to get help from a ‘real person’, the Tobacco Quitline, presently run regionally from NIMHANS, VP Chest Institute, Tata Memorial Hospital, and the Borooah Cancer Institute offer this service. On calling 1800112356, the calls are routed to the regional centres based on the caller’s language and trained counsellors support in the quit attempt. Since it is common for tobacco users to relapse, the counsellors ‘handhold’ the caller through proactive calls to deal with a relapse and ensure follow-up for a year. A silver lining during COVID-19 is the increased commitment of users to quit as reflected in higher short-term quit rates of registered callers.

(The author is professor and head of the Department of Psychiatry, NIMHANS, Bengaluru)