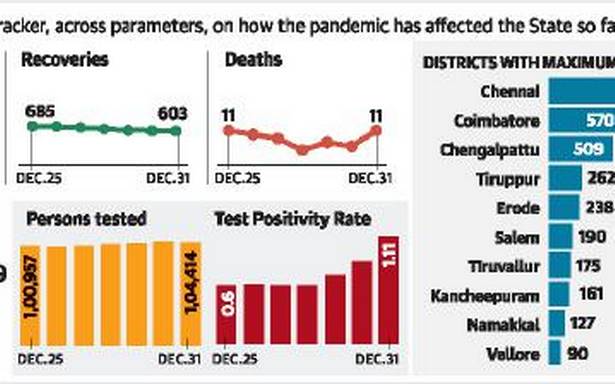 Tamil Nadu reported a sharp rise in the number of new COVID-19 cases as the daily tally crossed 1,000 after two months on Friday. The State recorded 1,155 COVID-19 new cases. More than half of the cases were in Chennai.

Meanwhile, another 74 persons tested positive for Omicron variant of SARS-CoV-2, taking the number of confirmed cases of the new variant to 120. Of these, 63 cases were not linked with international travellers.

Chennai, which reported 397 cases on Thursday, clocked 589 new cases on Friday. However, the city did not record any death due to COVID-19. Along with Chennai, the neighbouring districts of Chengalpattu, Tiruvallur and Kancheepuram took recorded a rise in the number of new cases. While 137 persons tested positive for COVID-19 in Chengalpattu, there were 43 and 34 cases in Tiruvallur and Kancheepuram respectively. Tiruppur and Thoothukudi registered a marginal rise in cases as 43 and 30 persons tested positive for the infection respectively.

There were 70 new cases in Coimbatore while Erode logged 22 cases. Two districts of Ariyalur and Mayiladuthurai had no new case of COVID-19. As many as 23 districts recorded fewer than 10 cases each. Ten international travellers — seven from the UAE and one each from Qatar, Sri Lanka and Oman — and a person who returned from West Bengal tested positive for COVID-19 in the State. With this, the State’s tally of COVID-19 cases rose to 27,48,045.

According to the bulletin issued by the Health Department, out of 117 samples sent for whole genomic sequencing earlier in the week, 115 results were received and two were pending validation. Of the results received, 74 were identified as Omicron variant and 41 as Delta variant. With this, the number of persons who have tested positive for Omicron variant stood at 120 in Tamil Nadu. Chennai had the most number of cases at 95.

While two cases were cross-notified to Kerala and Puducherry, 52 patients were admitted to hospitals. This included 38 in Chennai.

The State recorded 11 deaths, taking the toll to 36,776. While there were no deaths in 33 districts, Coimbatore reported four fatalities, while there were two deaths in Salem, Tiruvallur and Tiruchi and one in Tiruppur. Among the deceased were two persons aged in their 30s.

Another 1,23,261 persons were vaccinated in the State.