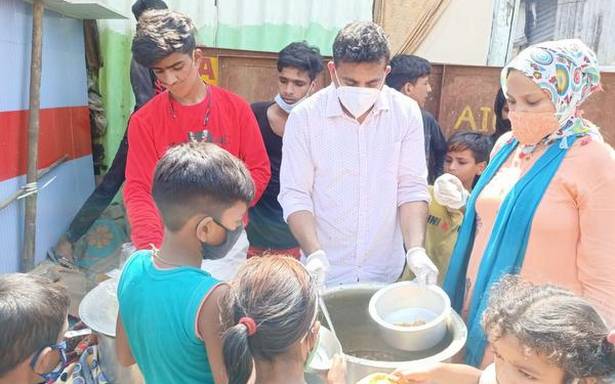 With the COVID-19 crisis intensifying the woes of common citizens, a 45-year-old resident of Malwani in Malad, though rendered unemployed, is dipping into his dwindling savings to feed poor families.

Faiyaz Shaikh, who had been helping the poor with supplies of rations and medicines mobilised from NGOs since the outbreak of COVID-19 last year, has once again come forward to help, local residents said.

Mr. Shaikh said, “This time, it is very critical. There is zero support from NGOs as they seem to have exhausted all their resources. Having helped people last year, I just cannot sit silent because NGOs are not able to help.”

He said he came up with the idea of a community kitchen after seeing the suffering of slum dwellers in Malwani. “This time, some individuals are helping. Whenever there is scarcity, I am deploying my own funds. The kitchen must continue to feed children and the needy,” he said.

Mr. Shaikh said every day over 500 people are provided food free of cost. He has also been sending packets of rations to needy families. “This area is full of poverty. You have to see it for yourself to believe their plight. Migrant workers who could not find a way to their home towns are without jobs and their families are hungry. I have taken up the responsibility to stand by them in their time of need,” said Mr. Shaikh, who lost his managerial job in a perfume and cosmetics company last year.

“I lost my job in August and got one-and-a-half-year’s salary as a severance package. I have used half of that amount to feed the poor. I will continue to do so as long as I can,” he said, adding that before losing his job he withdrew money from his Provident Fund account to provide essential supplies to the poor.

Mr. Shaikh’s wife, Mizga, runs an English-medium school in the slum colony and serves as its principal. She is also helping her husband in his charitable work. “She has not earned anything since last year. The fees of students have been waived for one year as the parents are poor. Our main objective has been to feed the hungry,” Mr. Shaikh said.

When Cyclone Tauktae hit Maharashtra’s coast last week, squally winds blew away the roofs of several houses in the colony. The Shaikhs then provided these families shelter in the school and made sure they were well-fed. Local residents said the couple has been using all the resources at their disposal to help people amid the COVID-19 crisis.

Mr. Shaikh has urged more people to support his cause so that no one goes hungry in these tough times.