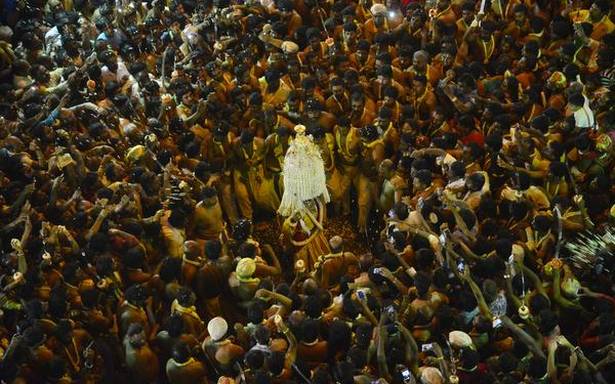 Two days after 39 employees of an office building in Nagarathpet, coming under Dharmaraya Swamy Temple ward, tested positive for COVID-19, 56 others from the same area have tested positive.

With 95 people testing positive so far, BBMP sources said that this may have an impact on the way Bengaluru Karaga is celebrated this year. The Karaga celebrations were to begin on April 18 and culminate with a night-long procession on April 27.

According to information provided by the BBMP, a total of 2,610 persons were tested from April 5 and 8. The results of another 1,100 people are awaited.

At a recent meeting chaired by BBMP Chief Commissioner Gaurav Gupta and elected representatives on Karaga, it had been decided to first constitute a festival committee, which would suggest how the historical festival should be celebrated this year. Last year, due to the national lockdown, the Karaga was celebrated with just the ceremonial puja in the Dharmaraya Swamy Temple.

Mr. Gupta told The Hindu that given the current situation, the night-long procession may not be ‘appropriate behaviour’. “All the symptoms and events are leading to the conclusion that Karaga should be restricted to a simple celebration with pujas as per the Agama shastra within the temple,” he said.

He, however, maintained that a final decision has not yet been taken. “We are still in the process of consultation. The final decision will be taken after the festival committee submits its report in another 6-7 days,” he added.