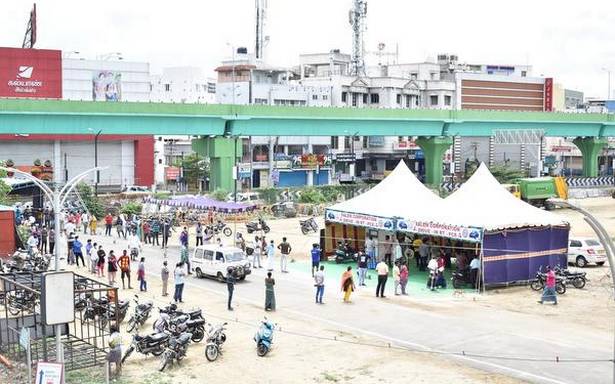 The number of active containment zones in Salem district crossed the 100-mark on Saturday as 101 zones were reported here.

According to health officials, as on Saturday, 6,079 swab samples were collected for tests and 829 COVID-19 positive cases were reported, highest in recent times.

Corporation Commissioner N. Ravichandran said that they have increased door-to-door checks to improve screening of patients with symptoms.

Mr. Ravichandran said, “we have increased the number of field workers to about 650 persons and they have been allotted streets permanently.

These workers would visit the streets frequently and conduct screenings. Urban health nurses are tracking the health condition of persons in home isolation.”

He added that besides fever camps, the drive-in swab testing centre has also been received well by the public and over 400 samples have been collected on a day.

Mr. Ravichandran said that they have also arranged mobile grocery vehicles and vegetable vehicles to prevent crowding of the public in markets and shops.

He added that a voluntary group has also been helping with meals for patients under home isolation.

Mr. Ravichandran added that the Corporation has identified additional buildings to set up COVID-19 care centres, if there is further increase in cases.