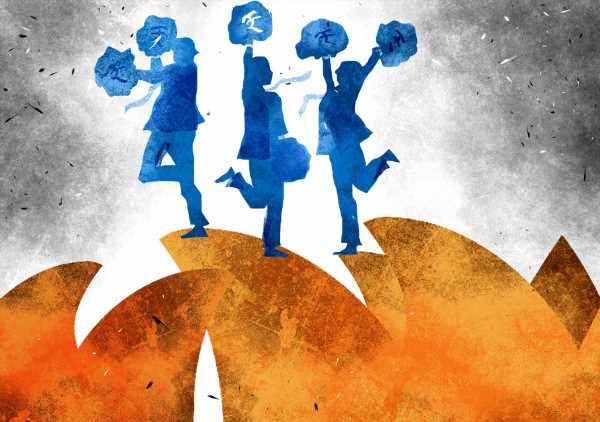 Like ants declining to question the rules of the anthill, they feel innately justified in their approach, notes Shyam G Menon. 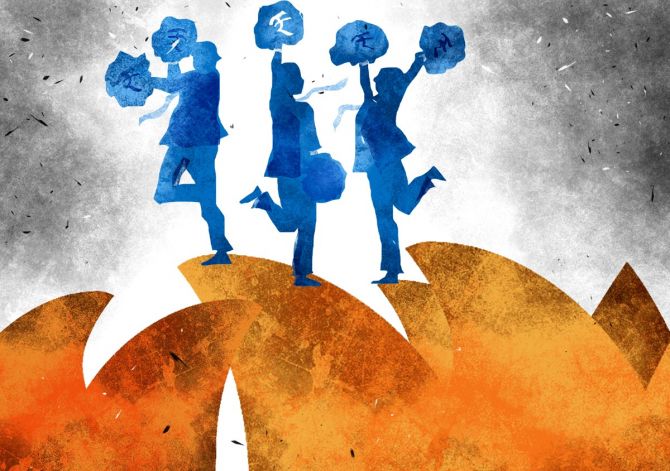 Barring an exceptional few who speak their mind, corporate India has served as a cheerleader for the government.

A likely reason for this is, money rarely cares what ideology it is dealing with as long as its interests are protected.

To that extent, it doesn’t obsess with issues like human rights and restrictions on freedom.

What matters is how well a government understands money and within that, the vertical of business.

Another is fear of retaliation should company owners or top executives speak their mind.

A vindictive government can hurt in many ways. Say nothing or sing praise — that is more expedient.

On the other hand, if you see the risk of punishment as common peril facing anyone speaking honestly (and there are many ordinary citizens speaking up), it makes you wonder why well-educated people end up so blind to the goings-on, once they embrace career and wealth.

How do those who attended some of the best universities, become subsequently handmaidens in the passage of a country into a state of self-conferred greatness, GDP-worship and poor respect for freedom and human rights?

The industrial workforce is a legacy of the last couple of centuries.

Within that, the portion we associate with modern corporate mentality acquired momentum in the twentieth century.

As an experiential force shaping human outlook, it is quite influential at present.

In India, its numbers — as in voter strength — is modest but it is sought after by parties for its disproportionately deep pockets.

Some business leaders did shine in their given field. But it is also true that inhouse PR and the hunger for content in business media ensured extrapolation of accomplishments in the specific into images larger than life. Either way, corporates and corporate leaders have become influential constituencies.

For political parties, getting corporates onto their side means access to resources.

Companies contribute to the coffers of political parties they agree with; sometimes it is also to keep disagreeable out of their hair.

Aside from this, there are cultural parallels between corporates and select streams of ideology.

Corporate culture with its emphasis on goal, strategy, leaders and disciplined followers, harks of a surrogate army.

Within the commercial goals they commit to, the essay pretty much a battle.

In fact, the words ‘battle,’ ‘war’ and ‘strategy’ are frequently used to describe competition in the industry.

This sort of existence lost to the specific and only peripherally aware of the whole is fine fodder for fascism.

The latter, which caters to those seeking majestic purpose in human existence, typically embraces rigid constructs translated to reality by a dedicated workforce wherein each participant focuses on a given task. They build the empire of their dreams, bit by bit.

For those wired this way, the architecture of fascism offers the same comfort as an address in industry or military. Some people like that sense of belonging.

Not surprisingly, many of today’s corporate officials come across as Right-wing supporters or fence-sitters guarded in voicing their political views.

They are used to functioning with a focus on money, markets and shareholder value.

When they speak on politics, state of the country or even react to the Union Budget, you strain to see candidness and wider perspective.

If this is the mindset the world’s universities have been churning out, catering as they do to the rush to study subjects like finance, technology and management, then no marks for guessing which political dispensation benefits.

It is probably part of the reason we see so much interest in the Right-wing. Many of us have been subconsciously groomed for it.

Indeed, one of the arguments I hear from my corporate friends is the puzzle of a rash of Right-wing governments emergent across the globe.

They suspect it is the sign of an era and their personal political choice or the opportunistic lack of it is merely part of how things ought to be.

Like ants declining to question the rules of the anthill, they feel innately justified in their approach.

As I see it, the reasons for the Right-wing phenomenon are several. There is the earlier mentioned tenor of technology and technical education – how it can play into the hands of a dystopic order unless individuals genuinely value freedom and human thought.

Other reasons for the Right-wing’s ascent range from the backlash to globalisation, faith in strongman personalities to protect us from the growing insecurities of our collective existence to even capitalism recasting itself in a frantic bid to stay alive by outrunning the environmental limits it breached; a sort of final hurrah before the wheels come off the bus.

To me, the well-educated lot missing these angles and them refusing to put freedom, human rights and liberal values above money, is the bigger puzzle about corporates.

The puzzle isn’t why Right-wing movements arise but why even the educated among us, approve it.

It is a conundrum for the world’s universities to ponder as humanity and the planet stand at crossroads they have never encountered before.

The former fed on a regimen of competition has authored dramatic economic and social inequalities while the latter finds itself exploited, polluted and warmed to its gills by decadent consumerism.

All this, despite the race, to get educated and so many holding degrees from elite universities.

Every once in a while, a whistleblower dares to speak up.

A few others, unable to find fulfilment in the corporate ideal, leave it for other pursuits. But the vast majority of the educated and corporate seem to endure the paradigm without discomfort. They are remembered for their career and contribution to wealth creation.

If I were a teacher, I would be wondering: Where are we getting it wrong? Is creating a people with a high degree of technical competence and organisational compliance but no conscience, ideal education?

It is on the strength of the resultant Nelson’s Eye among the educated to what is going on in the country that Right-wing politics currently merits its share of corporate funding.

Despite the havoc it has caused to people’s lives, India’s Right-wing is spared comprehensive scrutiny by our highly qualified corporate professionals trained to serve organisations.

As per media reports, a sizable chunk of funding for the Right-wing comes from overseas Indians and companies that are resident here.

If they regained their senses and reflected, those funds wouldn’t go where they do; at least not so easily.

For this to happen, the ones immersed in corporate woodwork and declining to notice the damage the Right-wing caused must be encouraged to lift their head and see.

They must stop being opportunistic fence-sitters casting their lot with an assured winner as opposed to standing up for an inclusive, humane and just set of principles. The latter is what defines modern nations.

My corporate friends argue the political opposition is still pulling in different directions. They are correct.

Not just that, when compared to tactics like the Cabinet reshuffle of July 2021 which saw technocrats and young people inducted, the Opposition has little to impress the corporate crowd with. But therein lay my friends’ eternal weakness too — when it comes to politics, they don’t see beyond the optics of plans, projects and their execution.

In the business opportunities associated with looking modern, their idea of a modern country ends.