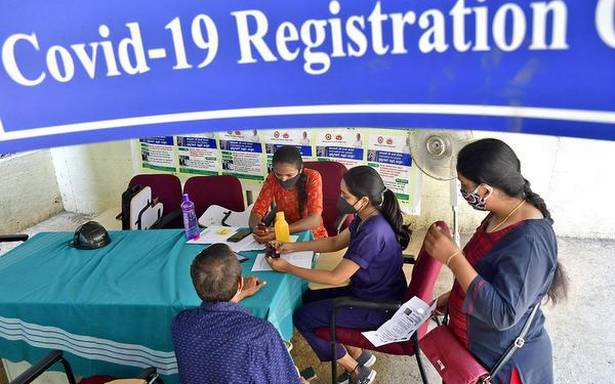 Employees with high exposure should get vaccine without age bar, it tells Centre; virus cases steady in southern States

Telangana has requested the Central government to allow COVID-19 vaccination for all those who have high exposure to the public, such as teachers, bus and cab drivers, bank staff and employees of commercial establishments. The State Director of Public Health G Srinivasa Rao also cited street vendors, shopkeepers, and others as facing risk.

The official said that a response to the request was expected in a few days. For a few months now, private companies had come with requests to vaccinate all their employees regardless of age group.

On Saturday, COVID-19 incidence remained high in southern States. Kerala added 2,055 cases, after testing 52,288 samples. The test positivity rate (TPR) rose to 3.93%. A.P. reported 947 infections. In Karnataka, Bengaluru Urban district, with 1,820 cases, was identified as one of the 46 high burden districts in the country while the State total stood at 2,886. Telangana added 495 cases on Friday.

In Kerala, the addition of 14 deaths which took place over the past few days raised cumulative fatalities to 4,553. Ernakulam reported four deaths, Alappuzha and Kottayam three each, Kannur two while one death each was reported from Kollam and Wayanad.

In Andhra Pradesh, a day after 66 students tested positive at the hostels of Andhra University College of Engineering, the district administration declared the area a containment zone. District Collector V. Vinay Chand said there was no need to panic, as AU was not an indication of a second wave. He said all the cases were asymptomatic.

ICU admissions in Telangana increased from around 350-370 patients a day from March 1 to 14, to over 600 patients a day now. On Friday, 58,029 samples were tested and results of 984 were awaited. Two more COVID-19 patients died. The 495 new cases included 142 from Greater Hyderabad Municipal Corporation region.

Union Health Secretary Rajesh Bhushan on Saturday chaired a meeting with Principal Secretaries and officials of 12 States, along with Municipal Commissioners and District Collectors of 46 worst-hit districts.

Karnataka Health Commissioner K.V. Trilok Chandra said the State had been advised to strictly enforce COVID-appropriate behaviour. With 13 deaths, the toll rose to 12,484 in the State.

(With inputs from Vijayawada, Hyderabad and Bengaluru bureaus)