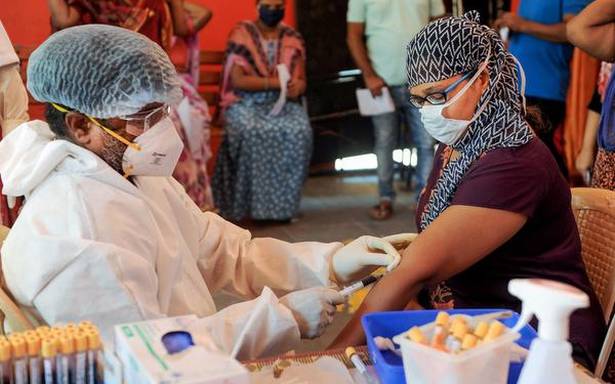 The survey sampled people from 70 districts across 21 States.

Nearly one in five Indians had been infected by the SARS-CoV-2 coronavirus until December 2020, the third round of the Indian Council of Medical Research’s (ICMR) serological survey has found. This is roughly a three-fold increase since August 2020 and a 30-fold increase since May 2020, when previous rounds of the survey were conducted.

“The message is that a large proportion of the population remains vulnerable. Vaccines are necessary and there can be no complacency with regards to masks, social distancing and hand hygiene,” Dr. Balram Bhargava, Director General, ICMR, said at a press briefing on Thursday.

The survey sampled people from 70 districts across 21 States.

The overall prevalence in the population was 21.5%, which averaged over India’s population indicates that about 270 million may have been exposed to the virus. India has so far confirmed a little over 10 million infections — or 27 cases to each confirmed case of infection. In the previous survey, there were 26 to 31 undetected cases for every confirmed case.

India is showing a declining number in fresh infections since September, with only around 12,899 new infections added on Thursday, and 1.6 lakh active cases. Experts, however, have previously noted that serosurveys don’t capture the extent of the spread, and other modelling studies have shown that as much as 50% of the population may have been exposed.

In the previous survey, only 5.2% of those sampled in rural areas showed antibodies, whereas that figure has now jumped to 19% in the latest survey. There was a sharp rise across urban and non-urban slum areas, too. In urban slums, it was 31%, nearly twice as much as the previous survey findings of 16%. In “urban non slums” the prevalence this time was 26% compared with 9% in the second survey.

By comparison, in the second survey, only 5.4% of children/teenagers, and 6.9% of those in the 18-44 years age group reported positive for antibodies.

The latest serosurvey also separately sampled 7,171 healthcare workers and those who work in hospital settings. Nearly 26% of doctors and nurses have coronavirus antibodies, as did 25.4% of paramedical staff — underlining their higher risk of being exposed to coronavirus infections than the general population.

“We are seeing that that infection rates in rural areas, too, are catching up. Recent serosurveys in Delhi, Pune and Hyderabad all show high prevalence in urban settings. The spread is certainly slower in rural areas because of density but that doesn’t mean we are immune from future spikes and it would be wise to probably prioritise vaccination in the villages than cities. The survey also doesn’t account for the possibility of reinfection, or whether we will be more vulnerable to mutant strains,” said a senior epidemiologist who was involved in the survey.

The higher prevalence among children or young adults, according to Dr. Samiran Panda, who heads ICMR’s epidemiology division, showed that it was no longer true, as earlier believed, that children or the young were better protected. “Several studies have now established this. They are much less likely to be severely sick but they can be infectious,” he told The Hindu.

Another factor was that in the newest survey, the antibody test employed was specifically designed to check for antibodies produced against the spike protein. “This is more sensitive than the one used last time and therefore overall detection rates could be higher,” Dr. Panda said.

The ICMR results presented today have not been formally published in a peer-reviewed journal, and it was only last week that the results of the second survey were published in Lancet Global Health.