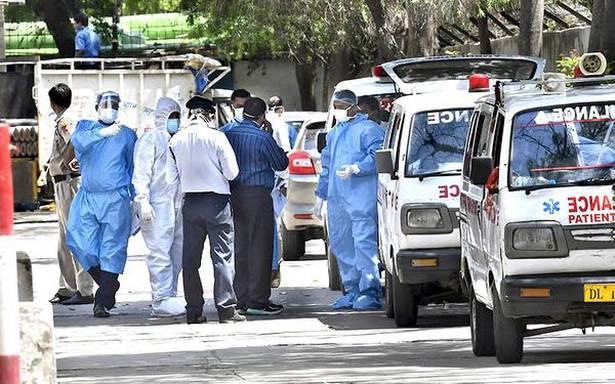 Meanwhile, calling it necessary to curb the spread of the delta variant, Cuba has now started vaccinating children as young as 2

New COVID-19 cases have reduced overall across India and even in Kerala, but Mizoram remained a State of concern, said V.K. Paul, (member) Health, Niti Aayog.

“Mizoram is a State of concern even though we are seeing a declining trend of new cases across India and even in Kerala. In the coming two to three months, we have to maintain caution against any upsurge in COVID-19 cases. We request everyone to remain careful in the coming quarter. We’re happy to see the number of cases stabilising,” he said.

India reported 30,570 new coronavirus infections as of 8 am on Thursday, according to Union Health Ministry data.

Thane district’s infection count up by 239, death toll by three

The COVID-19 tally in Thane district of Maharashtra has increased by 239 to 5,55,607, while the death of three patients has taken its toll to 11,362, an official said on Friday.

These cases and fatalities were reported on Thursday, he said.

Thane’s COVID-19 mortality rate is 2.04% at present, the official said.

In neighbouring Palghar district, the infection caseload has gone up to 1,35,250, while the death toll stood at 3,273, another official said.

South Korea has reported more than 2,000 new cases of the coronavirus, nearing a one-day record set last month, continuing an alarming surge as the nation enters its biggest holiday of the year.

The 2,008 cases reported Friday was the 73rd consecutive day of over 1,000 despite officials enforcing the country’s strongest social distancing rules short of a lockdown in capital Seoul and other large population centers for the past 10 weeks.

More than 1,500 of the new case came from the greater Seoul area, home to half of a population of more than 51 million, where infections have surged as schools reopened and people returned from summer vacations in recent weeks.

Presenting an overall picture of the current COVID-19 situation in India, Health Secretary Rajesh Bhushan said there was an overall decline being observed in the country. “Weekly positivity is less than 3% for the eleventh consecutive week. Currently, there is only one State with over one lakh active cases.”

“States and Union Territories such as Lakshadweep, Chandigarh, Goa and Himachal Pradesh have registered 100% vaccine coverage of the first dose for its over 18 years of age population. Overall, 20% of the population over 18 is fully vaccinated,” he said.

Florida surpassed 50,000 coronavirus deaths since the pandemic began, health officials reported Thursday, with more than one fourth of those succumbing this summer as the state battled a fierce surge in infections fueled by the delta variant.

The U.S. Centers for Disease Control and Prevention tallied 50,811 deaths after adding more than 1,500 COVID-19 deaths provided Thursday by the state’s health department. Those reported deaths occurred over various dates in recent weeks.

Florida has the 11th worst per-capita death rate among the 50 states, the CDC says. New Jersey, Mississippi and New York have had the worst, but Florida has risen from the 17th spot in the past two weeks.

Cuba on Thursday began a COVID-19 vaccination campaign for children between the ages of 2 and 10, saying it was necessary to curb the spread of the delta variant.

Cuba has two homegrown vaccines, Abdala and Soberana, that it says are safe and effective. Both require three shots. In previous weeks, the government started vaccinating people between 11 and 18 years old.

U.N. rule may be hurdle for Brazil vaccine skeptic Bolsonaro

Brazilian President Jair Bolsonaro’s reluctance to get a COVID-19 vaccine is a rarity in his country — and may complicate his plans to attend the UN’s General Assembly next week.

The assembly’s leader, Abdulla Shahid, announced on Wednesday that all attendees must be vaccinated to speak at the gathering, citing a New York City policy. That could bar Mr. Bolsonaro, a beleaguered right-wing leader seeking to rehabilitate his image abroad.

Mr. Morrison said federal and state leaders would discuss vaccine passports and expanding home quarantine when they meet for a national cabinet later on Friday.

"You will see vaccinated people being able to move and do more things," Mr. Morrison told radio station 3AW.