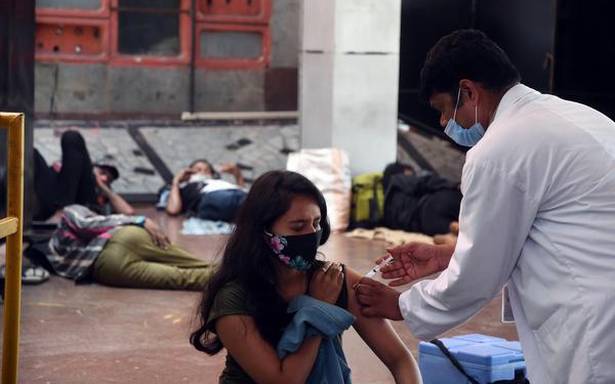 Junior classes in New Delhi will be allowed to resume only after the upcoming festival season concludes, Lieutenant-Governor Anil Baijal said on September 29 following a Delhi Disaster Management Authority (DDMA) meeting. Only students of Classes IX-XII are currently attending school. It was also decided that festive gatherings will be allowed, subject to observance of COVID-19 protocol.

Read | A fund without a care for the RTI

The Ministry of Home Affairs (MHA) issued fresh guidelines on September 28 asking States for prompt and effective containment measures and to accelerate the pace of vaccination to prevent the rise in number of COVID-19 cases due to the coming festival season. The guidelines issued under the Disaster Management Act, 2005 will be effective till October 31.

AstraZeneca Plc’s COVID-19 vaccine demonstrated 74% efficacy at preventing symptomatic disease, a figure that increased to 83.5% in people aged 65 and older, according to long-awaited results of the company’s U.S. clinical trial published on September 29.

Overall efficacy of 74% was lower than the interim 79% figure reported by the British drugmaker in March, a result AstraZeneca revised days later to 76% after a rare public rebuke from health officials that the figure was based on "outdated information." -Reuters

With several north Karnataka districts continuing to lag in vaccination, the State’s COVID-19 Technical Advisory Committee (TAC) has warned that the third wave, as and if it happens, is likely to hit this region the most.

Expressing concern over the poor vaccination coverage in NK districts, especially Bidar, Vijayapura, Kalaburagi, Raichur, Haveri, and others adjoining Maharashtra, the TAC has recommended that vaccination in these districts needs to be ramped up on a war-footing through special outreach community campaigns.

Lt. Governor Tamilisai Soundararajan on Wednesday hinted that the Union Territory will probably follow Tamil Nadu’s decision to resume offline classes for primary school students in Standards I to VIII from November 1.

As Puducherry does not have a separate School Board, it follows the Tamil Nadu State Board of School Examinations and has replicated its decisions regarding reopening of schools during the pandemic in the Union Territory.

About 18,000 random blood samples have been collected so far as part of the sixth serological survey and the exercise is expected to be completed by Tuesday. The result of the survey is likely to be announced by October 15, officials said.

Last week, the Delhi government had started the sixth serological survey to assess the percentage of population having antibodies against COVID-19, either through natural infection or vaccination.

Poland sends over 100,000 doses of AstraZeneca vaccine to Egypt

Poland sent over 100,000 doses of the AstraZeneca COVID-19 vaccine to Egypt, the Polish foreign ministry said on September 29.

"More than 100,000 COVID-19 vaccines are on their way from Warsaw to Cairo. The donation of vaccines to Egypt is an expression of solidarity with an important partner of Poland in North Africa," the ministry said on Twitter. -Reuters

A 21-day quarantine for non-fully vaccinated athletes, officials and workers at the 2022 Beijing Olympics. Daily testing for vaccinated people. No tickets sold to anyone living outside China.

Restrictions imposed to control the COVID-19 pandemic at the next Winter Games in February were announced September 29 by the International Olympic Committee.

While not imposing a vaccine mandate, organizers in Beijing plan stricter rules than applied at the Tokyo Olympics where vaccination was advised though not demanded within a strict regime of testing. -AP

The Himachal Pradesh government will provide ex-gratia assistance of Rs 50,000 to the kin of each of those who succumbed to COVID-19, a State official said here on September 29. The State government notified the District Disaster Management Authority (DDMA) of all the 12 districts as disbursement authority for the ex-gratia assistance, director-cum-special secretary of revenue-disaster management Sudesh Kumar Mokhta said. -PTI

Laboratory studies show that Merck & Co’s experimental oral COVID-19 antiviral drug, molnupiravir, is likely to be effective against known variants of the coronavirus, including the dominant, highly transmissible Delta, the company said on September 29.

Since molnupiravir does not target the spike protein of the virus – the target of all current COVID-19 vaccines – which defines the differences between the variants, the drug should be equally effective as the virus continues to evolve, said Jay Grobler, head of infectious disease and vaccines at Merck. -Reuters

EU to decide on Pfizer booster on October 4: Document

The EU’s drugs regulator will decide on October 4 whether to approve Pfizer’s COVID-19 booster vaccine, but it is unlikely to give precise guidance on who should receive it, according to an internal document and two officials.

If the European Medicines Agency (EMA) gives its backing for the jab, the 27-member block would join the United States, Britain and Israel which have already received the green light to deploy boosters, even though there is no consensus among scientists that they are necessary. -Reuters

The Punjab government on September 29 decided to ease restrictions on public gatherings in the wake of improvement in the COVID-19 situation in the State.

Earlier, it was 150 for indoor and 300 for outdoor gatherings. -PTI

YouTube will block all anti-vaccine content, moving beyond COVID-19 to include content that alleges vaccines cause chronic health effects or contains misinformation on the substances in vaccines, it said in a blog post on September 29.

Teachers, staffers of Delhi govt schools to be treated as on leave if not vaccinated by October 15

Unvaccinated teachers and non-teaching staffers of Delhi government schools will not be allowed to attend school from October 15 and they will be considered as being on leave, the Directorate of Education (DoE) said on September 29.

"We all are aware that the country is threatened with the COVID-19 pandemic, it is necessary to take all effective measures to prevent the spread of the same. The schools under DoE have been reopened in a phased manner, so it is the prime concern of the Delhi government that the environment of the schools remain safe with the appropriate implementation of SoPs and measures," DoE Director Udit Raj said in an official order. -PTI

Slovenia suspended use of the Johnson & Johnson coronavirus vaccine September 29 while it investigates the death of a 20-year-old woman, as thousands started gathering for an anti-vaccination protest in the small European Union nation.

The suspension will be in place until experts determine whether there was a link between the woman’s death from a stroke this week and the vaccine shot she received two weeks earlier, Health Minister Janez Poklukar said. -AP

National parks in Assam to reopen for tourists

The national parks in Assam were shut to visitors for several months due to COVID-19 pandemic and the monsoon season, they said.

This year the parks were shut before the normal schedule because of the outbreak of the second wave of COVID-19.

The Kaziranga National Park (KNP), known the world over for its one horn rhino, will initially be opened partially with access to only three ranges from October 1, an official release said. -PTI