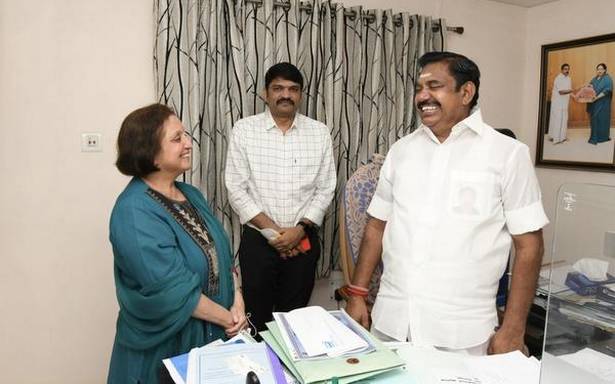 Tamil Nadu CM spoke to “The Hindu” on how bolstering health infrastructure helped in dealing with the pandemic effectively.

After successfully controlling the spread of COVID-19 by deploying a comprehensive healthcare strategy, Tamil Nadu Chief Minister Edappadi K. Palaniswami said he was now focusing on the task of providing vaccination free of cost to all in the State.

The CM said that the frontline workforce, including healthcare workers, police personnel, senior citizens and people with co-morbidities, would be covered in the first phase. His remarks on the issue came during a conversation with Dr. Malini Parthasarathy, Chairperson, The Hindu Group of Publications, who called on him at his residence here on Wednesday.

Asked whether it would not be better to involve private hospitals in the distribution of vaccines, especially as the need was to scale up the production and distribution of the vaccines, he affirmed that private hospitals would be involved at a later stage. The Chief Minister spoke to The Hindu on how bolstering health infrastructure helped in dealing with the pandemic effectively.

Besides establishing 11 new medical colleges and upgrading over 2,400 Primary Health Centres, 6.17 lakh “fever camps” had been held across the State, where 3.26 crore people were examined. RT-PCR tests were conducted on 1.35 crore people and the testing process was on, with an average of 70,000 samples each day. He said 15,000 health workers had been appointed exclusively to provide treatment to COVID-19 positive cases, and 2,000 mini-clinics with a doctor and two paramedical staff were also coming up.

“Though the number of new cases and deaths have come down drastically, the aggressive testing process is continuing in all districts. The strategy to establish facilities like adequate beds; ICU facilities equipped with sufficient number of ventilators, oxygen cylinders, antiviral drugs, etc.; and Covid Care Centres, yielded the desired results,” the Chief Minister said.

With over 7.93 lakh people recovering from the infection and the death rate kept at 1.48%, the State’s performance received words of appreciation from Prime Minister Narendra Modi, who had urged other States to emulate Tamil Nadu’s model of pandemic management, Mr. Palaniswami said.

Mr. Palaniswami said that his government was keen on preserving the legacy of the late former chief minister Jayalalithaa in respect of the outreach to women, focusing on their security and empowerment.

Mr. Palaniswami said that Chennai and Coimbatore were assessed to be the safest cities for women. Chennai City Police had installed about 3 lakh CCTV cameras, the highest in the country, which were serving as a deterrence to criminals, and also aiding in early detection of cases. People were being encouraged to install CCTV cameras at their premises as a safety measure, he added. The ‘Kavalan’ app was another SOS mechanism for people in distress to seek police assistance.

Explaining his plan to open the State economy and inspire confidence that the health security of the State was in order, he said he was making efforts in this regard. On the industrial front, a single window system had simplified the process of sanctioning approvals for business proposals. “I am convening a meeting every month to dispose of applications that are pending for various approvals. Absolute transparency has been brought about in the system to boost industrial activity…any industrialist can seek an appointment and walk in to meet me for grievance redressal,” he said.

Asked if it was possible to allow private investments in the power sector, the Chief Minister ruled out the possibility of privatising the power sector saying that “it would lead to a lot of issues”. He said the All India Anna Dravida Munnetra Kazhagam (AIADMK) government would go by the views of the people, who wanted the power sector to be owned and operated by the State.

Despite the COVID-19 lockdown, the State machinery had ensured implementation of public welfare schemes uninterruptedly, the CM said. Agricultural activity was not affected during the pandemic and paddy cultivation in the Cauvery delta region had recorded an all-time high yield. The lockdown and prohibitory orders that followed had no impact on the prices of essential commodities, he added.

Asked if he was confident that he could carry forward the legacy of the charismatic former leader Jayalalithaa and deliver a decisive mandate for the AIADMK, Mr. Palaniswamy said that he was touring the State in the run-up to the Assembly elections and he was clear that, “Makkal thaan Ammavin vaarisu” (the people are Jayalalithaa’s heirs). He expressed certainty that the administrative work done by his government in the last four years would stand them in good stead.