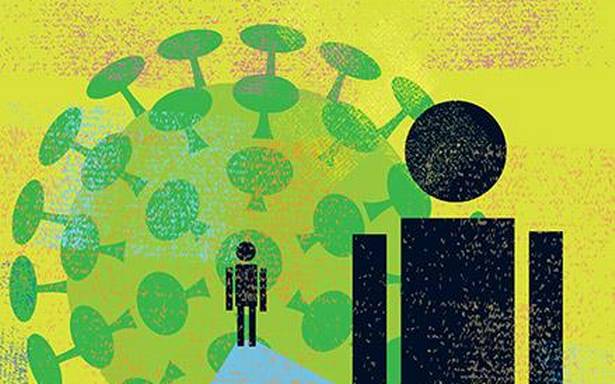 Death of near and dear ones and loss of jobs have shaken many people in the second wave.

A retired nurse at the Government Medical College Hospital in Thiruvananthapuram lost her husband to COVID-19. Her son too tested positive and had to enter isolation. Caught between grief for her husband and worry for her son, she went through a harrowing time.

There was no family or friend to hold on to amid the pandemic. As reassurance and support were what she needed most, Anilkumar T.V., professor of psychiatry at the hospital, communicated with her over the phone regularly.

Unlike the first wave of the COVID-19 pandemic, when there was a gradual build-up of cases and people had time to come to terms with what was happening, the second wave has spread like wildfire, bringing with it fear and anxiety. To cope with these, people are increasingly turning to counsellors and psychiatrists.

Shintu Sebastian, a mental health counsellor attached to the Kozhikode-based Institute of Mental Health and Neurosciences (IMHANS), says in the initial days of the lockdown last year, many were scared about the impact of the pandemic. Some were depressed after they lost their jobs. There were parents concerned about behavioural changes in children. However, when the number of fresh cases declined, so did the calls.

Now, as the second wave of infection spreads, the calls too have started coming in at IMHANS, says Ms. Shintu.

Stressors can be varied. A young bank employee Ms. Raj counselled was in isolation when news about the pandemic all-round and how people in his age group were vulnerable left him so shaken he would stay up all night conjuring up unwelcome scenarios.

Home isolation worsens the mental health problems of those under treatment for such issues. Ms. Raj narrates how a young woman teetered on the brink of suicide when the rest of her family became infected. Her sister used to supervise her medication, but alone in a room, the young woman expressed apprehension that she would overdose on them. As she was under treatment as part of the District Mental Health Programme, her details were passed on to them for follow-up.

Trauma and isolation experienced by people will only increase as cases surge, especially if there are deaths. When people do not get to bid a final farewell to their loved ones, they are denied a closure and the healing process suffers, Dr. Anilkumar points out.

Cinu Rajan, a resident of Thiruvananthapuram, has first-hand experience of this. From losing his job abroad to the death of both parents from COVID-19 to spending time in the ICU, he went through an ordeal last year. By the time his wife tested positive, he felt strong enough to cope with her illness. After all, he had seen six people die in a single day in the ICU and spent over two months in quarantine in total. But he is infinitely thankful to family, friends and healthcare workers who supported him.

The helpline of Manasa, a non-governmental organisation of medical college doctors in Thiruvananthapuram, is also available for patients who have returned home to call up and seek clarifications.