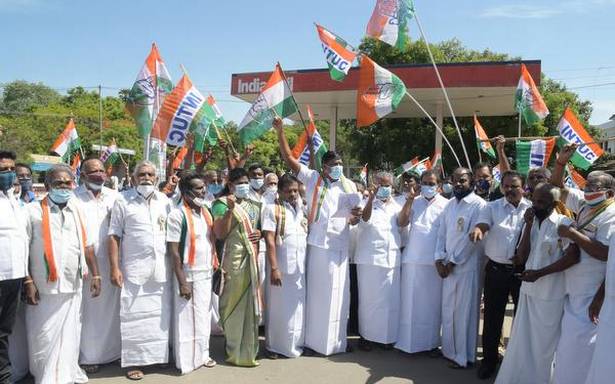 The BJP that came to power criticising the Congress-led United Progressive Alliance government at the Centre for ‘high’ fuel prices, was now fleecing the common man with exorbitant prices of fuel despite decline in international crude oil price, said Sivakasi MLA G. Ashokan on Friday.

Excise duty on fuel had increased at least three times in the last seven years. After fleecing the poor through indirect taxes, the Centre was not ready to pay for vaccines, he charged.

Mr. Karthikeyan said, “though, the people are struggling to make both ends meet due to the financial crisis caused by COVID-19, the Centre is taking no measures to reduce fuel prices.”

Dindigul district president Manikandan organised a protest on the Main Road in the town and demanded that the Centre reduce fuel prices.

In Theni district, Congress district president Jeeva led a protest at a petrol bunk in Chinnamanur.

Congress cadres staged a demonstration in front of a fuel station in Palayamkottai.

In Nagercoil, the partymen, led by district president Radhakrishnan, staged a demonstration in front of a fuel station near the Collectorate.