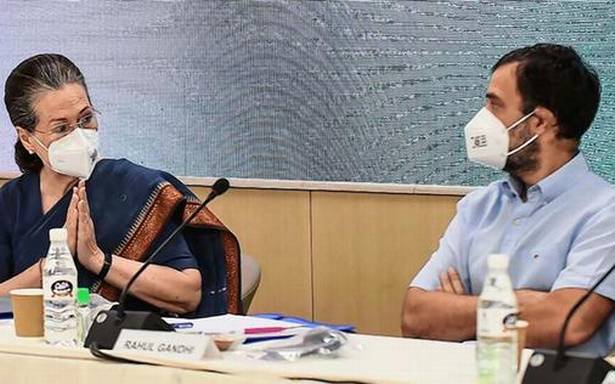 Despite tensions over losing its leaders to Trinamool, party decides to reach out over farm laws

The Congress will reach out to Opposition parties, including the Trinamool Congress, to seek the repeal of the farm laws on the first day of the winter session of Parliament, and to demand a new law to guarantee minimum support price (MSP), an immediate debate on price rise and the dismissal of the Minister of State for Home Affairs Ajay Mishra ‘Teni’, whose son is an accused in the Lakhimpur Kheri incident.

This was decided at a meeting of the Congress parliamentary strategy group on Thursday, held at party president Sonia Gandhi’s residence.

Ms. Gandhi is said to have asked the Leader of the Opposition in the Rajya Sabha, Mallikarjun Kharge, reach out to other Opposition parties. Deputy Leader Anand Sharma and Chief Whip Jairam Ramesh would also be reaching out to Opposition leaders for joint action on key issues.

But party leaders also agreed that disruption of proceedings should be the last resort and MPs must get a chance to raise their issues during the Question Hour and the Zero Hour.

The Congress would also insist on debating the Pegasus issue in the presence of Prime Minister Narendra Modi and seek a reply from him, demand ₹4 lakh compensation for COVID victims and seek a discussion on the reported Chinese incursion across Indian territory on the Arunachal Pradesh border.

Some of the leaders present at the meeting told The Hindu that all the leaders expressed their displeasure over the Trinamool’s new-found aggression against the Congress but Mr. Kharge reiterated the earlier stand taken by former party chief Rahul Gandhi that “parties may have differences in the State but need to work together in Parliament”.

“As the principal Opposition party, we will make sincere efforts to take everyone along and take collective decision. Mr. Kharge will convene a meeting of Opposition parties in the morning of November 29. It is up to Trinamool whether they would reciprocate or not. But we won’t let it dictate terms,” a senior leader said.

Trinamool Rajya Sabha floor leader Derek O’Brien said it was not unusual for an Opposition strategy meeting not to take place before the session. “There are certain obvious issues, the MSP, compensation for 750 farmers who lost their lives in the agitation, the continuous attack on federalism and so on. We are all on the same page on this issue,” he said.

He denied allegations that the Trinamool’s recent recruitment drive, poaching Congress leaders, will throw Opposition unity into disarray. “We haven’t poached any Congress leader. Those who joined the Trinamool have done so by their own free will and because they believe in Mamata Banerjee’s leadership,” he added.

The winter session will be the first one for two former Congress leaders — Sushmita Dev and Luizinho Falerio — who joined Trinamool and were elected to the Upper House.