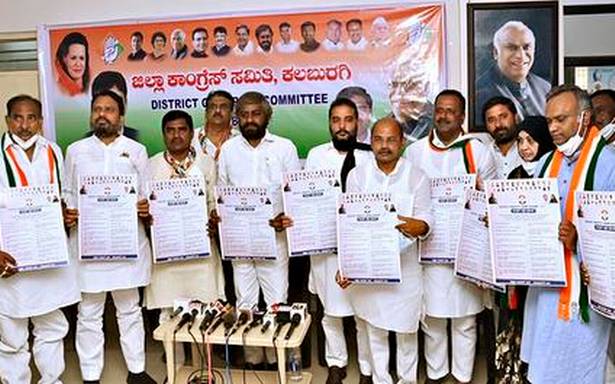 The manifesto promises basic amenities including 100 pure drinking water units, installation of LED street lamps. construction of a community hall, and a public library in each ward.

“We will also construct a cricket stadium and an indoor stadium in the city,” said Mr. Khandre.

The manifesto also included the installation of CCTV cameras in every ward, a four-wheeler parking facility in market areas, construction of public toilets, beautification of the city by planting two lakh saplings, and development of tourism places in the city.

The manifesto also listed the development works taken up by the then Congress government and the fake promises made by the ruling BJP government. Mr. Khandre said that with the efforts of Congress leaders from the region, the UPA accorded special status to the region through a constitutional amendment.

Mr. Khandre alleged that the ruling BJP government failed to effectively implement provisions provided under the 371(J) of the Constitution to benefit the reservation in education and employment in the region.

Mr. Khandre said that the State government has completely failed to tackle the COVID-19 pandemic.