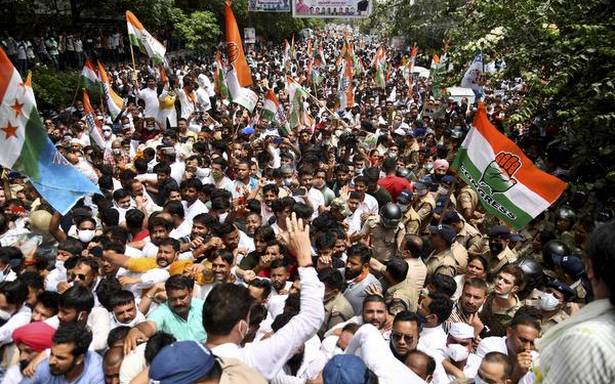 With the spiralling fuel prices coupled with the food inflation hitting household budgets, the Congress is planning an extensive countrywide campaign on the issue.

Sources said a series of press meets will be kicked off from next week with a press conference addressed by former Finance Minister P. Chidambaram in Delhi.

Senior leaders have been assigned a metropolitan city each to amplify the party’s message. As per the schedule, Leader of Opposition in Rajya Sabha Mallikarjun Kharge will speak in Mumbai, Gaurav Gogoi in Kolkata, Shashi Tharoor in Chennai, Anand Sharma in Jaipur, Manish Tewari in Ahmedabad, Deepender Hooda in Hyderabad, Sachin Pilot in Dehradun and Kamal Nath in Lucknow.

The Congress is yet to schedule a strategy meeting ahead of the upcoming monsoon session of the Parliament which begins on July 19. However, senior leaders said the current economic situation will be one of the key issues that the party will raise during the 20-day sitting of the Parliament.

The petrol is currently priced at nearly ₹100 per litre or above in all the metropolitian cities. The rising fuel rates have had a cascading impact on essential commodity prices too. Both Amul and Mother Diary announced ₹2 per litre hike in milk prices on Saturday.

Earlier the party had organised a day-long protest at filling stations across the country against the repeated fuel price hikes.

The party has claimed that multiple layers of taxation both at the Centre and State are responsible for these hikes. They have argued that bringing the fuel prices under the ambit of GST is the only way to provide any relief to the end consumer.