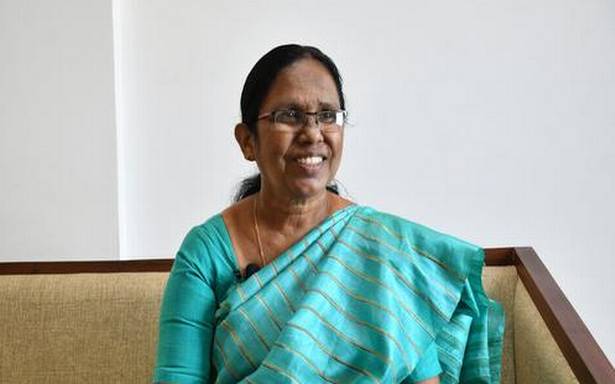 Former Health Minister and Communist Party of India (Marxist) [CPI(M)] legislative party whip K. K. Shailaja on Monday said the Congress party had alienated Opposition Leader V. D. Satheesan for openly declaring that he would not bow to pressure from caste-based social organisations and their satraps.

Ms. Shailaja was piloting the motion of thanks to the Governor’s policy address. By some accounts, she was arguably the first woman legislator to undertake the task.

Ms. Shailaja also slammed the Congress for being “science challenged”. She said the party was no different from the BJP in the matter. It singularly lacked a scientific temperament and toed a soft Hindutva line, she said.

Ms. Shailaja rejected Mr. Satheesan’s charge that the government had under-reported COVID-19 deaths. “Even if so, the death rate was never more than 0.5%. The government could keep it down to 0.4%. Health authorities have corrected any error in reporting subsequently,” she said.

The Left governments could fight COVID-19 better. North Korea and Vietnam were prime examples, she added.

Both the fronts accused each other of benefiting from cross-voting by the Bharathiya Janata Party (BJP). Congress MLA Thiruvanchoor Radhakrishnan ignited the controversy by accusing the Left Democratic Front (LDF) of courting divisive forces on either side of the religious spectrum. Despite overwhelming support from the BJP, the difference in vote share between the LDF and the Congress-led United Democratic Front (UDF) was merely 0.26%, Mr. Radhakrishnan said, adding that the UDF would rebound politically and come to power in the State again.

Congress legislator from Wayanad T. Siddique said Chief Minister Pinarayi Vijayan’s Wayanad package was a chimaera. He said the Governor’s policy address said little about curbing corruption and nepotism. The Congress MLA called the government “CM’s kitchen cabinet.” He said the BJP had attempted to do in Lakshadweep what the Chinese government had done in Tibet.

Former Devaswom Board Minister and CPI(M) legislator Kadakampally Surendran said the media had twisted his words about the Sabarimala issue. He said he had expressed regret about the violence that followed the Supreme Court verdict allowing women of all ages to worship at the Ayyappa Temple. However, some sections of the media had said he regretted the decision.

The debate would continue on Tuesday.