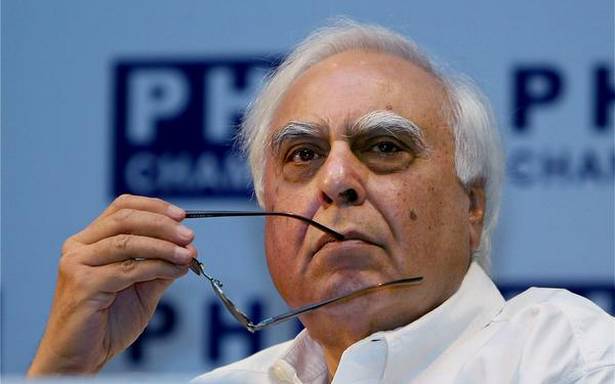 The veteran added that India needs a resurgent Congress and the party needs to rope in the right people.

The Congress must bring widespread reforms across all levels of the organisation to show it is no longer in a state of inertia and to present itself as a viable political alternative to the BJP, party veteran Kapil Sibal said on Sunday.

Mr. Sibal, who was among the G-23 leaders whose letter to Congress President Sonia Gandhi last year demanding a meaningful overhaul of the party had triggered a storm, hoped the organisational polls, recently postponed in the wake of the COVID-19 pandemic, will “happen sooner than later”.

In an exclusive interview to PTI, the former union minister acknowledged that at present there is no strong political alternative to the BJP but said that Prime Minister Narendra Modi has lost the moral authority to rule and the Congress can present an alternative due to the current mood in the country.

He also noted that while forming committees to review election losses is good, it will have no impact unless remedies suggested are implemented.

Noting that the party’s alliances with the All India United Democratic Front (AIUDF) in Assam and Indian Secular Front (ISF) in West Bengal were “not thought through”, Mr. Sibal said the Congress has failed to drive home the point that minority and majority communalism are equally dangerous for the country.

He cited this as one of the reasons for the poor performance of the party in recent assembly polls.

Amid defections of young leaders – Jyotiraditya Scindia and now Jitin Prasada – to the BJP, the former minister said “there is an urgent need to strike a balance between experience and youth.” He has earlier said that from “aaya ram, gaya ram politics, it has come to "prasada politics now” and asked whether Mr. Jitin will get the ‘prasada’ from the BJP, suggesting that leaders were moving out of the party to serve their political interests.

“At present, there is definitely a void in terms of a strong political alternative. It is exactly in this context, that I had given suggestions for some reforms in my party so that the country has a strong and credible opposition.

"But what comes out of it is not something for me to foretell. But I am sure, a time will come when the people of this country will decide what is good for them,” Mr. Sibal told PTI.

The veteran added that India needs a resurgent Congress and the party needs to rope in the right people to drive its poll strategy so that it can build upon the failures of the government.

“Victory of non-BJP parties in recent assembly elections has shown the chinks in the BJP’s armour in terms of its vulnerability to losing when faced with a stronger opposition,” he said.

“India needs a resurgent Congress. But for that, the party needs to show that it is active, present, aware and is in the mood to engage meaningfully.”

"For this to happen, we will need to have widespread reforms at the organisational hierarchy both at the central and state levels to show that the party is still a force to reckon with and is no longer in a state of inertia,” he said.

Exuding hope in the grand old party’s resurgence at a time of newly emerging political equations across India, Mr. Sibal said that despite a poor showing of the Congress electorally, the current mood in the country provides an opportunity for it to emerge as a viable alternative, owing to the party’s pan-India presence.

“The Modi government’s inept handling of the pandemic and the resultant anguish among people across the country needs to be channelised.”

"The Congress has to take it upon itself to provide an alternative roadmap in the nation’s interest and I am sure, we will emerge victorious in this enterprise,” he said just two days after strategist Prashant Kishor met NCP chief Sharad Pawar in Mumbai, triggering speculation of a potential third front.

Asked if the Congress had learnt its lessons from the Antony committee report after the 2014 Lok Sabha debacle, Mr. Sibal said the party had not been able to stress that all forms of communalism were dangerous.

“The Antony committee set up by Congress chief Sonia Gandhi soon after the 2014 Lok Sabha elections had rightly pointed out that fighting the polls on secularism versus communalism plank hurt the Congress that was identified as pro-minority, resulting in substantial electoral gains for the BJP.”

"More importantly the Congress also failed to drive home the point that minority and majority communalism were equally dangerous for the country. In my view, the decision to ally with All India United Democratic Front (AIUDF) in Assam and Indian Secular Front (ISF) in Bengal was not thought through,” said Mr. Sibal.

When pointed out that he had sought urgent party elections in the letter to Sonia Gandhi and if he agreed with the postponement of the exercise, Mr. Sibal said, “On January 22, the CWC had met to discuss the schedule for electing the new party chief in May. It was deferred by a month owing to the Assembly polls.

"The exercise is on hold at the moment because of the pandemic. I do hope it happens sooner rather than later.” The former union minister welcomed the constitution of a committee to review the party’s recent losses in West Bengal, Kerala, Assam and Puducherry, but added a caveat, “Setting up committees to analyse the reasons for any electoral debacle is welcome but unless the remedies suggested are accepted and acted upon, it will have no impact on the ground.” The panel headed by former Maharashtra chief minister Ashok Chavan has handed over its report to Sonia Gandhi with its recommendations, which the party will discuss internally.