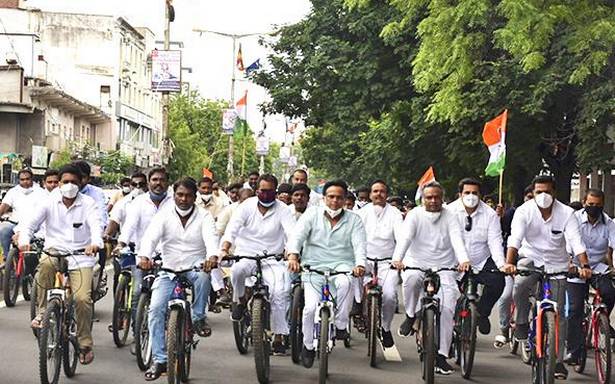 Condemning the Centre for the hike in fuel prices, Congress leaders rode cycles from the District Congress Committee Party office to fuel stations in Kalaburagi on Monday, demanding a rollback.

Congress leader and former Ministers Basavaraj Rayaraddi, Priyanka Kharge, MLA Ajay Singh, M.Y.Patil, former legislature B.R.Patil said that the increase in fuel prices was hurting the poor and salaried class, the farmers, who are suffering an unprecedented economic slowdown and unemployment due to the COVID-19 pandemic. The protesters raised slogans against the BJP-led Union government.

The petrol price on Monday touched an all-time high of ₹99.38 per litre in Kalaburagi while diesel crossed the ₹92 mark.