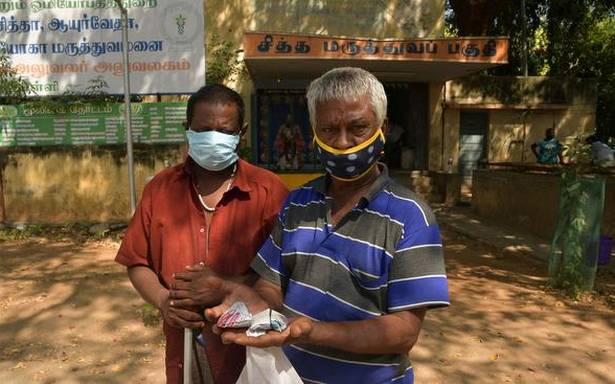 They are wrapped in old newspapers

There has been increase rise in number of patients seeking treatment under the Indian medicine systems at the District Headquarters Hospital. About 700 to 800 patients come to the hospital for treatment a day. Until a few years ago, the figure was just around 300 a day. Besides seeking remedy for common ailments such as fever, body aches, cold and cough, patients receive medicines for thyroid, sugar, hypertension, skin diseases and other ailments.

Tamil Nadu Medical Plant Farms and Herbal Medicine Corporation Limited (TAMPCOL), a State-owned company, procures, produces and supplies Indian traditional medicines to Siddha hospitals and clinics across the State. Patients, after meeting the doctors, will have to get medicines at the pharmacy. Barring a few medicines, pharmacist issues Siddha and Ayurvedic drugs by wrapping them in old newspapers, thereby raising concern over the unhealthy distribution practice.

Depending upon the quantum of medicines prescribed by the doctors, the pharmacist collects the powder drugs from containers and hands over the medicine to patients by folding them in newspaper. Old newspapers are kept ready for the purpose.

“Traditional Indian medicines are issued to patients like grocery items in small stores. It is baffling to note the practice in government hospitals, which are supposed to ensure clean, hygienic and healthy practices,” says N. Jamaludeen, a consumer activist.

Pointing to the healthy practices being followed in private Siddha hospitals and pharmacies, he says the government should set an example on distribution of medicines through neatly packed materials and containers.

When the practice was brought to the notice of S. Ganesh, Director of Indian Medicine, he said he would study the issue in detail. Steps would be taken to ensure proper packing of the traditional medicines before being issued to patients.