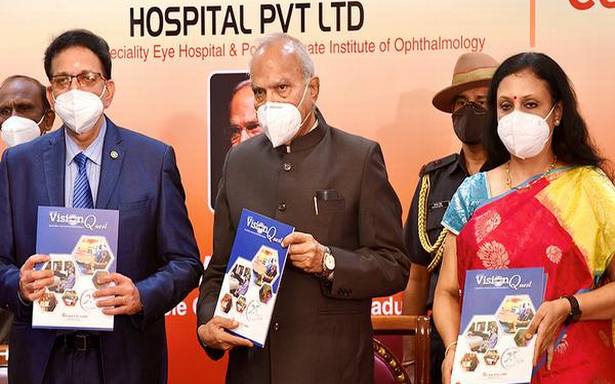 Technology should be leveraged to scale up treatment, says Banwarilal Purohit

Governor Banwarilal Purohit on Saturday said that a comprehensive approach was needed to treat not just cataract, but also curable blindness.

Mr. Purohit said while integrated efforts of the Union and State governments had resulted in reduction in blindness due to cataract, blindness due to other causes such as diabetic retinopathy and glaucoma were on the rise.

India with a huge population needed to encourage faster, precision-based systems of treatment to cover more people in a short time. Nanotechnology, robotics and artificial intelligence were likely to create newer methodologies for not only diagnosis and treatment, but also to provide solutions for preventive care, he said.

Stating that Tamil Nadu had traditionally been considered a leader in adopting latest technologies in healthcare, the Governor said that the robotic cataract surgery system in RECH was an example of how technology could be leveraged to attend to the needs of more patients.

Stressing the need for continuous interaction among various medical traditions, he said a new model must be created by keeping patients at the core of treatment without being fixated on a single system of medicine. He highlighted the need for creating more awareness on eye donation to meet the gap in availability of corneas for surgery.

Lauding the achievements of RECH, the Governor recalled his personal connection with the hospital as his family members and himself had been treated by Mohan Rajan, chairman and medical director of the hospital.

Dr. Rajan narrated the hospital’s journey and spoke on its commitment to provide quality and affordable eye care. A key reason for the hospital to be recognised as a premiere institution was its continuous investments in cutting-edge technologies.

Highlighting various initiatives launched by the hospital through its Chennai Vision Charitable Trust and Rotary Rajan Eye Bank in partnership with other organisations towards community ophthalmology, Dr. Rajan said that around 30 to 35% of the hospital’s services were provided free of cost. He said the hospital performed more than 6,000 free cornea surgeries and more than 1.15 lakh free cataract surgeries.

Sujatha Mohan, executive medical director of the hospital, welcomed the gathering. Doctors and employees with a long service at the hospital were felicitated on the occasion.