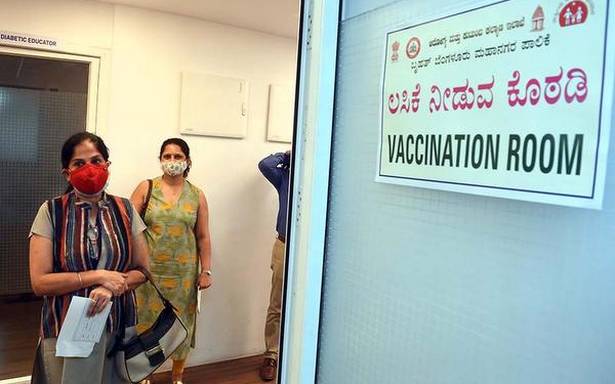 Karnataka was among the first States to announce free vaccination for citizens in the age group of 18 to 44 at government centres. But with its start getting delayed, some private hospitals went ahead and started inoculating those in this age group. However, a few days down the line, allegations are emerging of some of them charging above the price fixed by the government.

However, when contacted, the administration of one of the hospitals said they were charging ₹1,350 for Covaxin. The official did not comment further. Those who got the jab or are planning to were irked by the prices being quoted. Giridhur Sriraman, 26, who got vaccinated a few days ago, said, “I paid ₹1,350 for Covaxin. I think it is steep. I was lucky to be able to afford it,” he said.

Aditya Ram, 29, is still searching for slots. “I was shocked to see the prices at private hospitals. A few hospitals are charging ₹850 for Covishield, others ₹1,350 and ₹1,500 for Covaxin. For two doses, people are going to end up paying too much. Initially, I paid ₹250 each for my parents to get vaccinated at a private hospital. For the second dose, I booked a slot at ESI hospital as the cost of the vaccines were ₹850,” he said, adding that he would prefer going to a government hospital now, though finding appointments may be difficult.

Those who were trying to register after the State government’s announcement of vaccination for the age group at select government hospitals beginning on Monday, were left disappointed. “I live in Nagarabhavi and there are no government hospitals close by. No slots were showing in K.C. General, which is the next best option. When I checked private hospitals that are providing vaccination for my age group, there were no uniform rates even among the same hospital chain. For instance, one hospital was charging ₹1,350 for Covaxin. In another branch of the same chain, it was ₹1,000,” said Ganesh, 38.

Smaller hospitals also expressed difficulty in being able to afford procurement of the doses. A doctor, on condition of anonymity, said, “We are not even getting enough doses for the second dose of the 45 plus age group. One of the companies manufacturing the vaccine told us we need to buy minimum 5,000 doses at ₹1,200 per dose. How many small hospitals can afford this? Only the big hospitals will be able to.”