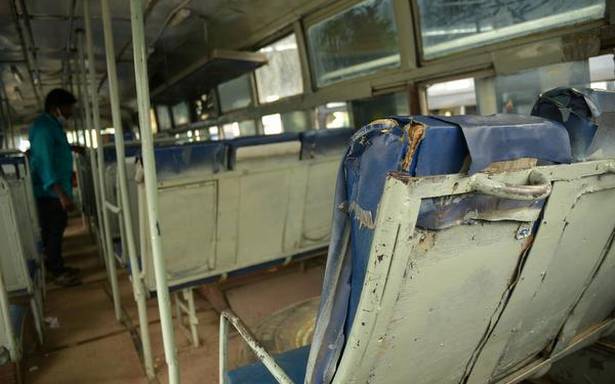 The quality of the TNSTC and SETC buses plying from the district has fallen drastically, with both the public and the drivers struggling to reach the destination, they alleged. At the Tiruchi Central Bus Stand, every other bus had some sort of plastering, or patchwork done on the roof to avoid seepage. “

“Even the slightest amount of rain causes rainwater to drip through the roof and onto our seats and clothes,” a frequent traveller said. The issue was highlighted by a Twitter user who said that the bus he took from Tiruchi to Chennai saw seepage. “Tiruchi to Chennai is a long-distance bus. Even if we were to get off on the next stop, or within a few kilometres, we can adjust. But on a journey of over six hours, it is difficult to do so,” the user said.

Another traveller, taking a Tiruchi to Madurai TNSTC bus hoped that new vehicles would be operated on bus routes with more footfall, as many office-goers and workers were troubled by the frequent breakdowns. “Many are just returning to work, and some buses which had been parked for months on end during the lockdown are not functioning well,” he said.

The interiors of the buses too, need improvement they said. “The seats are old and worn out. Water seeps through the roof onto the seat and damages them. In some buses, the thick covering has been torn, exposing the cushion. On exposure to the harsh weather, the cushion breaks off too,” another user said.