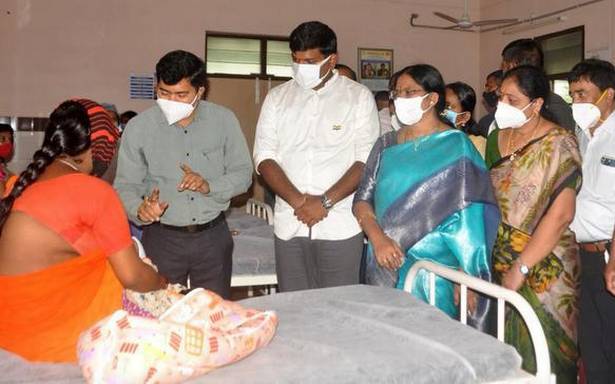 District Collector A. Mallikarjuna has directed medical officers to ensure that patients are provided basic amenities at government hospitals.

The Collector conducted a Hospital Development Committee meeting at the Area Hospital at Anakapalle on Thursday. He directed medical and health officials to submit proposals for sanction of budget for the diagnostic lab, electricity, air-conditioning, oxygen plant, Internet, oxygen concentrators, ambulances and other expenses. He assured to take steps for release of funds within two months and ordered immediate repair of the defunct ambulance.

Later, the Collector inspected the gynaecology ward and interacted with inpatients. When a woman told him that her name was not included in the ‘Aarogya Aasara’ scheme, Mr. Mallikarjuna called the Aarogyamitra and pulled her up. He expressed his displeasure at the failure to set up display boards in the ward, despite his instructions in the past, and warned that action would be initiated if the same was not corrected.

Anakapalle MP B.V. Satyavathi said that though there were 200 beds at the Area Hospital in Anakapalle, they were not shown in the records which was why the Centre was not sanctioning funds. She advised the Collector to initiate steps in this regard.