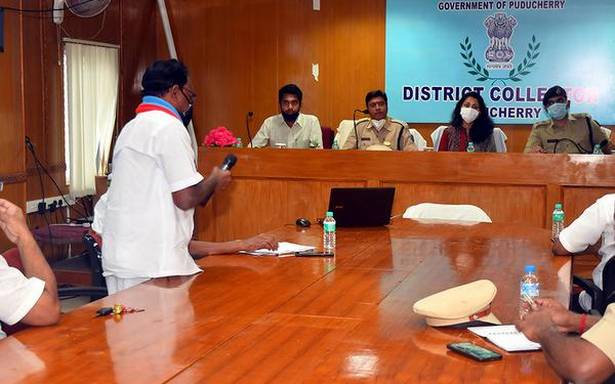 Appeal made to shift venue of protest proposed by Congress

District Collector Purva Garg and Puducherry Director General of Police Balaji Srivastava on Tuesday held separate meetings with leaders of political parties ahead of the indefinite agitation proposed by the ruling Congress against Lt. Governor Kiran Bedi in front of Raj Nivas from January 8.

Though the agitation was called by the ruling Congress and constituents of Secular Democratic Alliance parties, principal Opposition party All India N. R. Congress and All India Anna Dravida Munnetra Kazhagam also participated in the meeting.

According to a leader, who attended the meeting, the District Collector made an appeal to shift the venue of the meeting considering security concerns due to the proximity of the venue to security zones and residential areas nearby.

“A final call on shifting the venue to nearby areas was being discussed after the meeting with Collector and DGP and accordingly permission will be sought by Tuesday evening,” said a leader.

A high ranking official told The Hindu that the Home Department had apprised the Union Ministry of Home Affairs about the situation.

“Adequate precautions are being taken to ensure peace and security. Protest is one part and ensuring peace is another responsibility. We will take all necessary precautions to ensure no untoward incident happens,” said the officer.

A source in the Police Department said two companies of Rapid Action Force and one company of Central Industrial Security Force would arrive in Puducherry on Wednesday for security deployment around Raj Nivas.