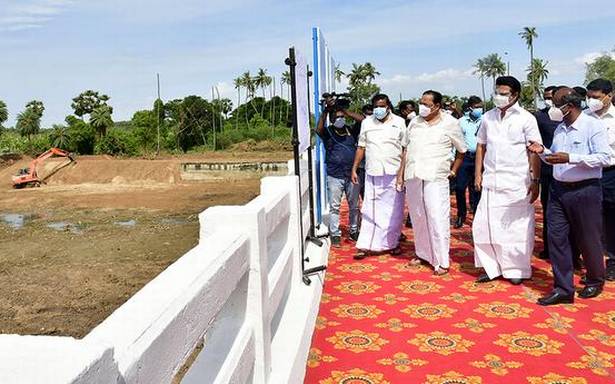 Ahead of the opening of the Mettur reservoir for irrigation on the scheduled date of June 12, Chief Minister M.K. Stalin on Friday inspected Kallanai and the desilting works being taken up in Thanjavur and Tiruchi districts.

After arriving in Tiruchi, Mr. Stalin drove to Kallanai, where he inspected and reviewed works taken up under the Extension, Renovation and Modernisation of Irrigation Infrastructure Programme.

Officials, including Thanjavur Collector M. Govinda Rao, briefed him about the works taken up under the special desilting scheme in the delta districts to ensure that water released from the Mettur dam reaches the tail-end areas quickly.

Works on removing shoals and silt accumulation from stretches of the Cauvery and its tributaries, canals, surplus courses and drains to a length of 1,169 km have been taken up in Thanjavur district at a cost of ₹20.5 crore.

Mr. Stalin inspected the removal of shoals on the Vennar in Palli Agraharam on the outskirts of Thanjavur town, and desilting works taken up on the Mudalai-Muthuvari channel near Vallam.

Officials told the Chief Minister that adequate machines had been deployed to complete the works well before water from Mettur reaches the Grand Anicut.

In Tiruchi, Mr. Stalin visited Kodiyalam, on the outskirts of the city, to inspect desilting work on the Pulivalam drainage canal, mainly used to discharge surplus water from Uyyankondam river during the monsoon.

He reviewed the progress of desilting works taken up at ₹5.62 crore in Tiruchi district. Collector S. Sivarasu, who briefed him about the desilting works in different parts of the district, said 63 works had been taken up in the district. Weeds, shoals, silt and accumulated sand would be cleared for 162.8 km. Nearly 50% of the works had been completed.